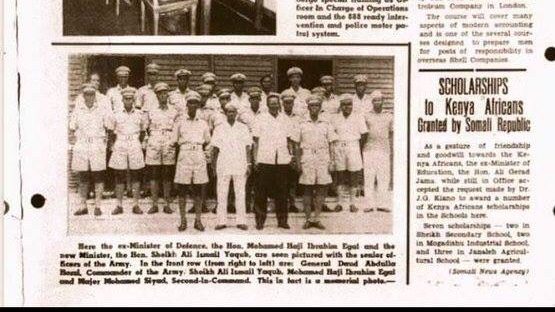 NAIROBI—A newspaper cutting from August of 1981 is doing rounds on social media, opening the lid on the sound relations Kenya and Somalia enjoyed before Mogadishu  collapsed into anarchy following the overthrow of the military regime of President Siad Barre in 1991.

A page from “The Somali News,” the now defunct Somalia’s English daily newspaper, is probably among the remaining evidence of how Somalia would severally come in aid of Kenya.

“Scholarship to Kenyan Africans granted by the Somali republic,” shouts an advert placement on page 5 of 4th of August, 1981 issue.

“As a gesture of friendship and goodwill towards Kenyan Africans, the ex-minister of Education Hon Ali Garad Jama while  in office accepted the request made by Dr Kiano to award a number of Kenyan African students scholarship to study in the schools here (Somalia).  Seven scholarships—two in Sheikh Secondary School, two in Mogadishu Industrial School and three in (name not visible) Agricultural School—were granted,” the advert said in full.

The scholarship advert comes at a time when the neighboring nations are at loggerheads over disputed maritime border.

Somalia was among the best country in Africa to live in before the civil war broke. Apart from the scholarships it offered to struggling students from several African nations, Somalia also helped countries such as Kenya and South African attain their independence from British rule.

The nation with the longest sea-line in Africa was once the stronger military power with perhaps the most robust air capabilities in sub-Saharan Africa.