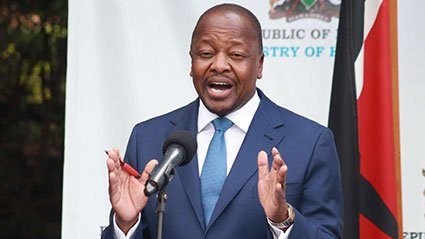 NAIROBI—The country recorded the highest number of Covid 19 recoveries today after 15 patients were discharged after turning negative to the highly contagious pandemic.

This brings the national tally of those who have fully recovered from the disease to 144.
Health Chief Administrative Secretary Dr Rashid Aman told the daily update on the status of the disease that 208 out of the 210 patients hospitalised with the viral disease across the country were in stable condition.

He however regretted to inform that the nation that two patient succumbed to the disease bringing the number of fatalities since the outbreak was confirmed in the country to 17.

Dr Rashid cautioned Kenyans to remain steadfast in the fight against the spread of the pandemic saying the reduced numbers of fresh infections and impressive recoveries reported ‘should not make us leave our guard’.

“We are not out of the woods yet and that’s why we are closely monitoring the trajectory our situation is taking by strictly adhering to the guidelines of keeping infections as minimal as possible” he said.

He revealed that 12 fresh infections were confirmed today out of the 777 samples taken from at least 14 counties over the last 24 hours further pushing the numbers of those who have tested positive to the viral disease to 396.

“Seven of the latest cases were recorded in Mombasa while the other five were detected in Nairobi estates of Eastliegh, Kileleshwa and Fedha” he said.

Mombasa county has consistently recorded a sharp increase in fresh infections of people who neither had a history of travelling outside the country nor were found in the designated isolation centres.

Dr Rashid told hoteliers to ensure that they fully complied with the stringent measures the government had outlined in the ministry’s website for reopening of their premises.
He asked the operators to get certification from the public health officials after meeting the laid down procedures to avert possible infections and spread of the pandemic during their operations.

He also announced that the government in collaboration with member states of the east African community had intensified cross border surveillance to ensure that long distance truck drivers were screened for Covid 19.