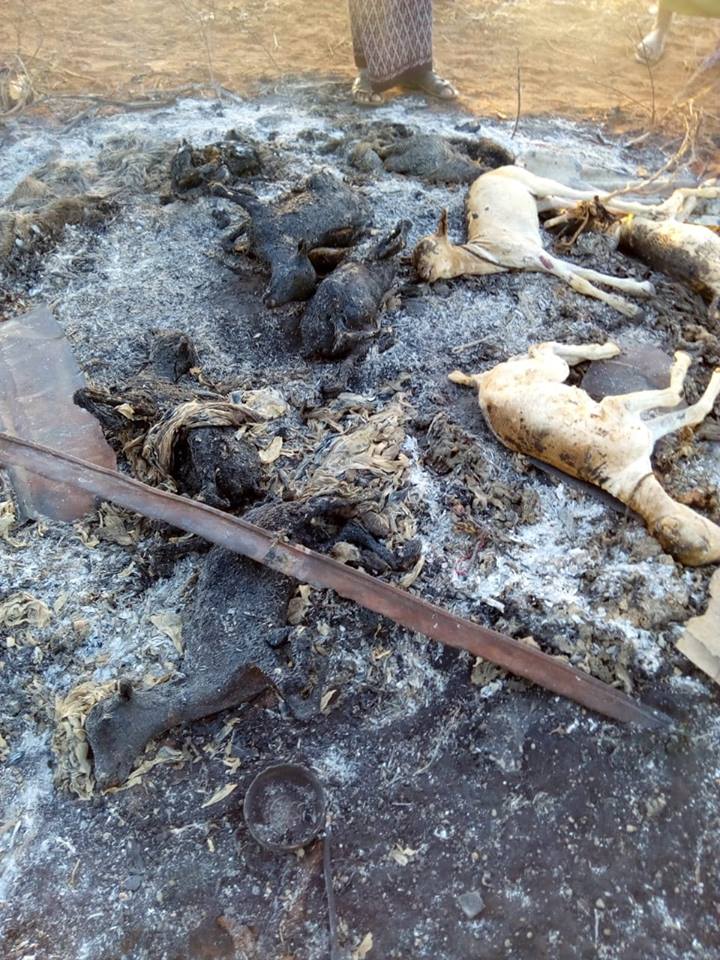 Burnt carcass of allegedly committed by the Kenyan Defense Forces in a village in Elwak. (Courtesy)

MANDERA—Elected leaders in Mandera County are now accusing the State of covering for the atrocities committed by the security forces in the county.

Speaking at his office compound in Mandera town, governor Ali Roba, flanked by his deputy and several county assembly members, warned the State that if action is not taken, they would move to court to seek redress.

They were reacting to an incident on Tuesday in Garsasela in Elwak where locals were harassed, allegedly, the Kenyan Defense Forces.

The gruesome incident followed an IED attack on a military truck at Qubo, a location near Dabacity.  The blast did not damage the truck and no soldier was injured in the 7:30 am attack on Tuesday.

Enraged by the incident, the soldiers descended on the villagers—22 people were injured in the operation, houses were torched and livestock killed.

He continued, “The Forces are always late in response to attacks but swift on revenge operations.”

He added that yesterday’s incident would reverse the gains made on the war to counter terrorism and violent extremism.

“…we previously won the war and the public were sharing information. This will cause anger and resentment,” Roba said.

“We (leaders) are ready to pull resources  and petitioned the State for the atrocities,” he noted, echoing statement said by the Mandera South MP who a fortnight ago threatened that he would seek legal redress to end the matter.

The area member of parliament Adan Hajj Ali Sheikh  was reacting to the discovery of three dead bodies at Elram of Kutulo ward in Mandera South Constituency.

“Our assessment is that the state of human rights is appalling. This gross rights violations are both caused by Alshabab and the security forces,” Khalid who is the head of Haki Afrika said.

While in Wajir, he met with area leaders and families of victims “who were abducted by security forces” and those whose property were destroyed.  A trauma healing was also conducted for the family of three men whose decomposing bodies were collected from villages in upper Wajir East on June.

“For long, this region was closed and its time to open it up for human rights to flourish,” he added.

He continued, “People of Wajir and the region at large are Kenyans and their rights must be respected. It’s time for the DPP (Director of Public Prosecution) and IPOA (The Independent Policing Oversight Authority) to come to Wajir and talk to the people.”