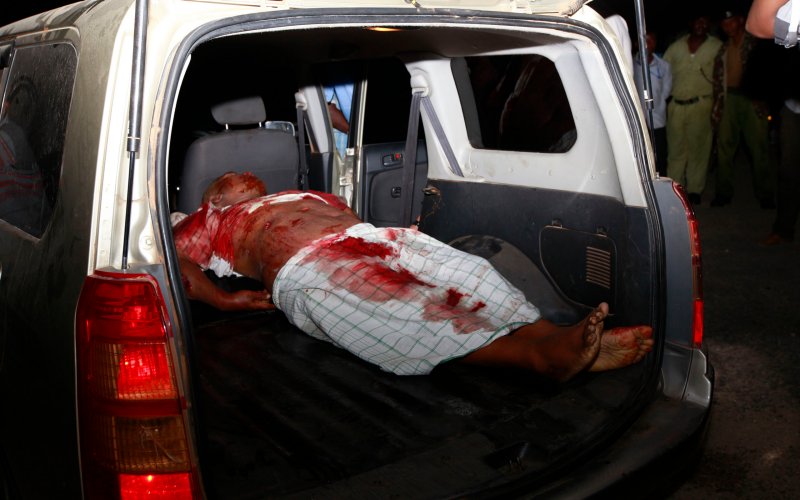 A damning investigative report by Al Jazeera television has for the first time revealed admissions from members of counter-terrorism agencies to eliminate terrorism suspects.

police load the body of unidentified man onto a car.
Photo: Courtesy

The programme which aired on Monday featured interviews from security officers who admitted that police assassinated suspects on government orders.
One of the officers from the Anti-Terrorism Pol ice Unit (ATPU) who spoke to the Qatar based international television network said orders for the extra judicial killings emanate from the country’s top security organ, the National Security Council: “It comprises of the President, Deputy President, Chief of the Defence Forces, Inspector General of Police, National Security Intelligence Service Director, Cabinet Secretary of Interior, and the Principal Secretary Interior. Any decision is made within that club of people,” he said.
In the report, Inside Kenya’s Death Squads which is also available on Youtube, the officers went ahead to admit that they were involved in the killings of a controversial Mombasa preacher Abubakar Sharrif Ahmed popularly known as Makaburi. Said one of the officers: “Makaburi was killed by the police. That execution was planned in Nairobi by very top, high-ranking police officers and government officials.”
Police eliminations, according to the ATPU officer, could run into hundreds every year: “Day in, day out, you hear of eliminating suspects. We have the police itself. We have special units like GSU. So not a total, but you can say about almost 500,” he said.
Another officer from the General Service Unit (GSU) Recce Company personally admitted to killing over 50 suspects.
Some of the suspects, one of the officers said were killed and their bodies dumped in the forests “where they will be forgotten” while others were killed in front of their families.
The officers justified their actions saying that they resorted to the killings after the police failed to produce strong and enough evidence to prosecute terror suspect. “If the law cannot work, there’s another option… Eliminate him,” said the GSU Recce Company officer.
In yet another admission, the officers claim the intelligence, which drives the government’s “elimination programme” was supplied by Western security agencies notably from Britain and Israel. “Once they give us the information, they know what they have told us. It is ABCD: ‘Mr. Jack’ is involved in ‘such and such’ a kind of activity. Tomorrow he’s no longer there. We have worked. Definitely the report that you gave us has been ‘worked on’,” the GSU Recce Company said.
The officers also spoke on the spate of disappearances of suspects saying that they should be presumed to be dead. “That is police work,” one of the officers told investigative reporter in the 47 minute documentary.
While Britain provides training, equipment and intelligence to the units, according to an officer from the GSU Radiation Unit officer, Israel provides training in the elimination programme. “How to eliminate, actually it is one of the training (from Israel),” he said.
In addition, the officer said the Israeli intelligence agency; Mossad was operating safe houses in the country as part of a security pact between the two countries.
The network said it verified that all the four officers whose identity was concealed, were serving members of ATPU, National Intelligence Service and the GSU unites- the Recce company and the Radiation Unit.
The head of the International Bar Association Mark Ellis warned the alleged complicity of Britain and Israel in the extra judicial killings violate international law. “It is clear based on these interviews that there’s at least prima facie evidence to suggest that these third party countries are involved and therefore they all have responsibility to investigate,” he told Al Jazeera.
Britain has faced previous allegations that its counter-terrorism efforts have led to complicity in human rights abuses overseas. According to the Guardian newspaper, only last week the parliamentary intelligence and security committee report criticized the UK government and the British intelligence agency MI6 for not pressing Kenya hard enough about its human rights record as it fights terrorism while accepting Kenyan assurances at face value.
A spokesman with the National Police Service Masoud Mwinyi while he denied the existence of a covert government assassination programme, he however refused to comment on the admissions made by the four security officers. ”I cannot deny or agree to that,” he said.
For long, human rights and Muslim leaders have accused the government of being behind the extra judicial killings while the State has maintained its denial in the killings.
The Chief Executive of Haki Africa Hussein Khalid warned that the continued killings were creating bitter feeling of resentment and alienating the Muslim community particularly the youth and the lack of concern to investigate the spate of murders was a clear pointer that the government was involved in these macabre killings. “Extra judicial killings have been happening at an alarming rate. The government does not feel that this is something we need to address he said while stressing that the elimination programme does not solve the problem only helps to worsen the situation. “This is what the terrorists want that Kenyans are shot dead in cold blood,” he said.