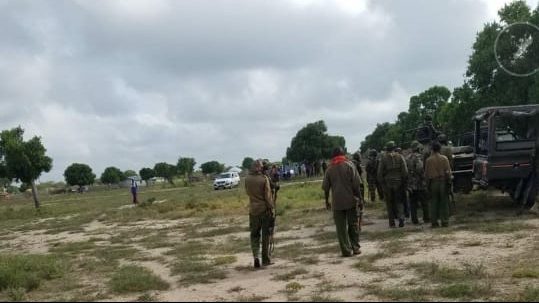 GARISSA—A group of Shabab militants have attacked Sangailu area, Ijara Sub-County in Garissa, where they torched a police reservist’s home.

The 9-pm incident was confirmed by Regional Commissioner Nick Ndalana, saying no casualty was reported.

“They managed to torch down one police reservist house but the attackers were repulsed immediately,” said Mr Ndalana.

The  Somali based militant group that in the recent past have been targeting non-local teachers and Safaricom masts in their attacks seems to have changed tact and are now pursuing police reservists.

In  the past one week the militants who are using the Boni forest as their hideout have killed one reservist and a father to one of them. They have also destroyed homesteads to their families for allegedly working alongside Kenyan security forces.

The attacks have caused fears among the reservists, their families and the residents whom the militants want to intimidate into surrender.

On  Wednesday last week, the militants attacked Sangole village in Hulugho Sub County where they killed 70-year-old Farah Gaab, the father of a police reservist, Khalif Farah, before torching down the deceased’s house. This was after they failed to get his son who is an NPR officer.

And on Tuesday night the militants shot dead, Farah Hussein a KPR officer in Bula Golol, also in Hulugho Sub County during a shootout. The attackers also made away into the Boni forest with the deceased’s AK 47 riffle and several rounds of ammunitions.

During the attack the militants who split into two groups attempted to overrun a nearby GSU camp but were repulsed. Two of the militants are suspected to have been seriously injured but were spirited away by their colleagues.

Last  night  the militants raided Gedilun village in Sangailu, Ijara sub-county where they burned down eight houses and Manyattas of NPR officers who were overpowered and escaped.

Confirming the incident, the Hulugho Sub-County Deputy Commissioner, Bernard Ole Kipury said that militants took away a father and son whom they later released.

Ole Kipury said that a combined team of security officers and NPR are combing the area for the militants who escaped on foot.

Talking  to KNA on phone on Thursday, the North Eastern Regional Commissioner (RC), Nicodemus  Ndalana  who termed the attacks as cowardly and an act of desperation said the government’s resolve to rid the region of the militants is on course.

Ndalana  said that his security team is determined in the war against terror and will work towards sealing the loopholes being exploited by the militants as witnessed by the new wave of attacks.

The  RC  assured North Eastern residents of their security and urged them to continue working closely with security agents on the ground.

Ndalana asked the NPRs whom he said are doing a commendable job that the government will do everything within its means to safeguard them, their families and property.

“I want to personally thank the NPR for volunteering to work alongside our security forces in the fight against terror. We are not taking their sacrifice for granted,” he said.

Ndalana further reiterated his earlier statement that there was local involvement in the attacks and urged members of public to volunteer information on such individuals.

“Those involved in these attacks seem to know their targets and surroundings very well. The government is aware of this and will go for those working with the militants,” he added.

Last month elected and former leaders led by governors of Garissa, Wajir and Mandera met in their respective counties to find homegrown solutions to the runaway security in the regions.

The Interior and Coordination of National Government Cabinet Secretary, Dr. Fred  Matiang’i  who visited Garissa immediately after the meetings received the recommendations and thanked the leaders for joining hands with the government in the war against terror.