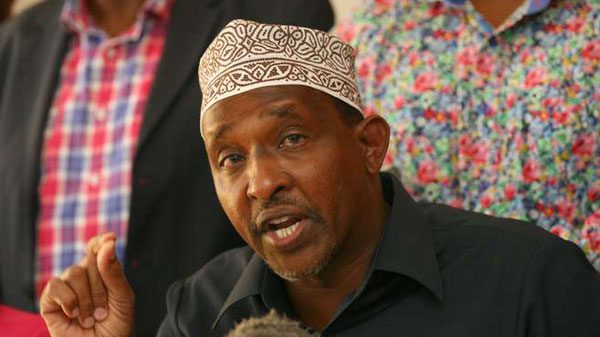 “As leaders in this region we have expressed our displeasure with the action taken by TSC and this issue is being addressed by the relevant government organs,” the Governor said.

The leaders were speaking in Garissa town when Governor Korane handed cheques worth Sh35 million to beneficiaries from three sub-counties under the Kenya Climate Smart Agriculture Project – a partnership of County Government of Garissa, national government and World Bank.

Korane said BBI was a national discourse where Garissa County and residents of NEP region could not afford to be left behind.

“We know the action taken by TSC to remove teachers from our schools is naive and borders on prejudice, but this issue is getting urgent attention,” the Governor said.

He said leaders from NEP had already met Security Cabinet Secretary Fred Matiangi and were scheduled to meet President Uhuru Kenyatta to discuss the education crisis and the matter will be addressed at that level.

It was therefore wrong for any leader to organise youths to attempt to disrupt the Garissa BBI rally under the pretext of protesting against the TSC, Korane said.

Speaking on Saturday at Boys Town Secondary School during a meeting with parents and students, Duale said there was no way the region would support BBI when it is facing many problems especially in the education sector.

A BBI rally is slated for next weekend in Garissa town which the leadership of Northeastern are expected to attend.

Duale had last week said he will not be attending the meetings that he termed a ‘confusion’.

Referring to the recent mass transfers of non-local teachers by the Teachers Service Commission from the counties of Mandera, Wajir and Garissa, the Garissa Town MP wondered why the commission would rush into making such a decision without consulting.

Candid discussion “Let me make it very clear. For us to discuss BBI the following must be done: We must candidly discuss why schools are closing in northeastern and our children are being denied the right to quality education. We also must discuss the serious insecurity bedeviling our region. Finally we must discuss the doctored census figures,” said Duale