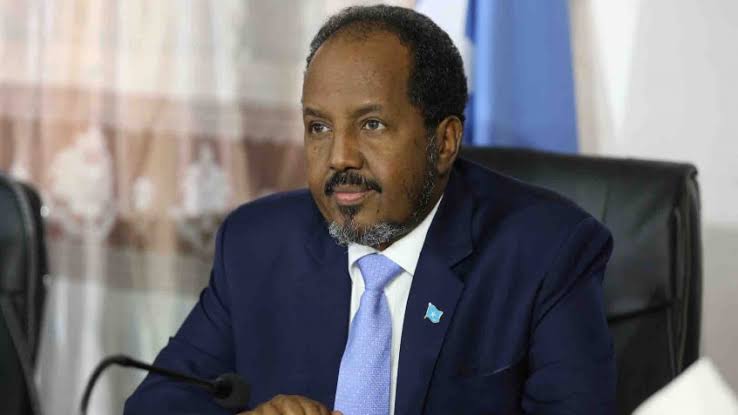 While the announcement of the votes continued, the two—Hassan and Farmajo—could be seen joking and, at times, congratulating one another, a scene reminiscent of 2017 when Farmajo won against Hassan.

Hassan, the 10th president, was immediately sworn-in. In his concession speech, the former president thanked the electoral commission.

“My brother, I welcome you to the position.  We will support you,” Farmajo said.

Hassan, the first Somali leader to win back the presidency, said in his acceptance speech that he would not use his position to carry out “witch-hunt.”

“As I have said before, I will not accept political witch-hunt and revenge,” he assured.

Somalia is holding a presidential election, but this long-delayed vote only involves 328 MPs and takes place in a heavily fortified area.

Voting has gone to a third and final round between President Mohamed Abdullahi “Farmajo” and former President Hassan Sheikh Mohamud.

In the second round, Mr Farmajo got 83 votes, while Mr Mohamud got 110.

A record 36 candidates had stood, with four making it through to the second round.

As the first-round votes were being counted, mortar shells were heard close to the airport. It is not yet clear if there were any casualties.

The winner will have to deal with the impact of an ongoing drought, in which 3.5 million Somalis are at risk of severe famine, according to the UN.

But the big task he faces is to wrest control of much of Somalia from al-Shabab.

The unusual circumstances highlight Somalia’s security issues, as well as the lack of democratic accountability.

The capital, Mogadishu, is in total lockdown until Monday morning.

Somalia has not had a one-person-one-vote democratic election since 1969.

(Additional reports by the BBC)