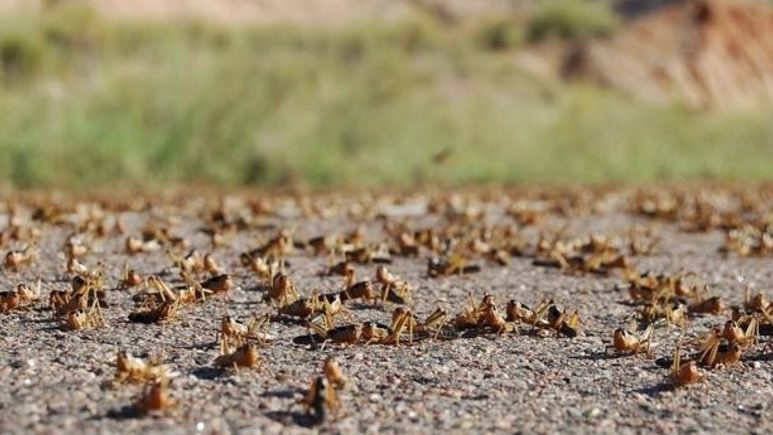 WAJIR—A swarm of desert locust from Ethiopia is now ravaging parts of Wajir North just a day after a combined effort by the locals and government agencies drove the destructive pest out of the county.

While confirming the new arrival, the Wajir County Chief Officer for Agriculture, Noor Mohamed said the pest came through Bute and Gurar areas in Wajir North before settling seven kilometres from Bute town.

The locust invasion in the country comes following another influx of the pests in some regions of Somalia which made its way into Kutulo, Tarbaj Constituency devastating large swathes of grassland. The initial swarm, who settled in Kutulo in Tarbaj sub-county, have now moved to Marsabit County through Tarbaj, Giriftu, Qara and lastly at Arbajahan before it crossed over to Marsabit.

Earlier this month the Food and Agriculture Organisation (FAO) warned that the locusts may spread to other East African countries if measures were not taken to stop the invasion.

The legislators from the region has tasked the government to deal with the invasion, adding that initial warning by the FAO was not taken in earnest.

Addressing the press at Parliament Buildings, the lawmakers challenged the government to “swift critical measures to address the issue.”

Eldas MP, Aden Keynan said if the locals won’t be addressed comprehensively, “the residents will have nowhere to get food, nor will they be able to feed their animals.”

“We are appealing to the government to intervene and provide aerial sprays using Unmanned Aerial Vehicles (UAVs),” said Mr Keynan.

The government, though slowly, started aerial spray in Mandera County, officials said. The area senator, Mumad Noord said the locust feeds on such amount of vegetation as “25 camels per day.”

“The main source of livelihood in these affected areas is livestock and the destructive nature of these pests cannot be ignored. They destroy vegetation enough to feed about 25 camels in a day. They could wipe out the country’s vegetation cover in six months,” the senator during the presser at the parliament.

According to experts, the successful prevention of desert locust plagues relies on regular monitoring in the desert, early warning, and timely response.