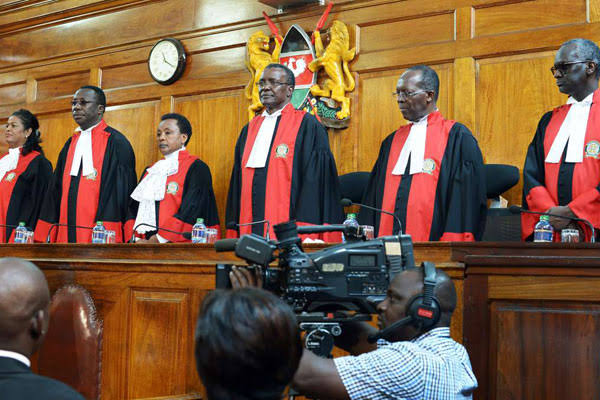 The Supreme Court judges moments before they delivered the 2017 ruling on the presidential petition. (courtesy)

1 The the High Court and the Court of Appeal determined the dispute within six months as required by law. The appeal at the Supreme Court was filed on 7th May 2018 and determined on 15th February 2019. This means the Supreme Court took 9 months to determine the appeal. The electoral dispute lagged in the courts for 18 months. Genuine questions may arise as to whether this is consistent with the constitutional imperative of timely resolution of electoral disputes.

2 The High Court (presided by Justice Mabeya) found and held that: (i) the Governor did not have the requisite academic qualification (i.e. university degree) to vie in the election; and (ii) the IEBC committed several irregularities and illegalities which affected both the credibility and the result of the election. Specifically, High Court found that the IEBC: (i) compromised the principle of the secrecy of the ballot; and (ii) posted results on Form 37C that were neither accountable nor verifiable. The validity of the election cannot stand in the face of any of these findings, at least not on a genuine reading of the Constitution and relevant laws.

3 The Governor lodged an appeal at the Court of Appeal contending: (i) the High Court lacked jurisdiction to determine the issue of whether he held a university degree (and this issue ought to have been determined by the IEBC as a pre-election dispute); and (ii) the High Court erred in concluding that the election was vitiated by irregularities and illegalities. The IEBC filed a cross-appeal on the issue of irregularities and illegalities, and the High Court’s conclusion that these had vitiated the integrity and result of the election.

6 The withdrawal of the IEBC’s appeal, legally speaking, meant two things. The first is that the IEBC accepted the High Court’s finding on irregularities and illegalities. The second is that the IEBC accepted High Court and Court of Appeal decisions to the effect that the Governor was not qualified to be a candidate at the election. The IEBC, however, made submissions and urged the Supreme Court to interfere with the decision of the Court of Appeal even after withdrawing its appeal. It is like eating your cake but somehow having it even after the eating.

8 The Supreme Court granted the Governor leave to adduce additional evidence on his academic qualification, on the spurious ground that the Governor had misunderstood a consent that the parties had filed at the trial court. This was irregular in at least three cardinal respects. First, appeals to the Supreme Court are limited to interpretation/application of the Constitution or matters of general public interest that go beyond the personal adversarial interests of specific litigants. The conventional understanding in the legal world is that there is no room for adducing additional evidence in a second appeal, especially where such an appeal is at the apex court. Secondly, the decision to allow the Governor to adduce additional evidence is inconsistent with the Supreme Court’s frequent reversal of the Court of Appeal’s decisions on the contentious ground that the latter Court has no jurisdiction to entertain appeals on matters of fact. It inconceivable that the Supreme Court can receive fresh evidence in a second appeal but the Court of Appeal cannot delve into matters of fact in a first appeal. Thirdly, a litigant can only adduce fresh evidence in appellate proceedings where: (i) the evidence was unavailable at the time of the trial; or (ii) the litigant could not, with due diligence, reasonably have been expected to adduce the evidence before the trial court. The Governor did not meet these twin criteria.

10 The Supreme Court’s decision that the High Court and the Court of Appeal lacked jurisdiction to examine the Governor’s academic qualifications is disingenuous, an act in legal sophistry/intellectual dishonest and untenable in many ways. To illustrate, the Supreme Court has previously upheld the jurisdiction of election courts to deal with matters that would otherwise be categorized as pre-election disputes, especially where such matters go to the root of the election. The Supreme Court has also previously held, in Advisory Opinion No. 2 of 2012, that an election is a process rather than an event. It is inconceivable that a candidate who does not have the requisite constitutional and legal qualifications can seek refuge in the courts merely because the issue was not raised as a pre-election dispute with the IEBC. The Supreme Court’s answer to this absurdity, that one can move the High Court in judicial review, is just dishonest legal sophistry. The High Court will easily strike out the judicial review application under the well-established rule in Speaker of the National Assembly v Karume, that one cannot institute judicial review proceedings to challenge the validity of an election.

11 In sum, the decision of the Supreme Court in this case is a perfect example of what I have previously described as legal sophistry, namely clever but dishonest legal arguments. The problem with legal sophistry is that it generates more heat than light. We do not know, even after the Supreme Court’s Judgment, whether the Governor holds the requisite academic qualification. We also do not know whether the election was marred by irregularities and illegalities, because the IEBC withdrew its appeal on this issue and the two appellate courts declined to examine the issue.

12 There are two absurdities embodied in the Supreme Court’s judgment and its legal sophistry. First, we have a valid election but cannot tell whether the winner of that election was eligible to contest the election in the first place. Secondly, we have a valid election which is also void on account of the High Court’s finding that it was vitiated by irregularities and illegalities that affected its credibility and result.

13 The decision of the Supreme Court in this case is only one in a long list of decisions from that Court, in election petition appeals, that have generated more heat than light. In fact, more than 90% of that court’s decisions in election petition appeals have generated more heat than light. The interesting bit is that the Supreme Court has disingenuously stretched its jurisdiction beyond elastic limit, through legal sophistry, to hear those appeals. We are not fools. There is more to the controversial Supreme Court decisions than meets the eye. I refuse to attribute unjust, absurd or plainly wrong decisions to incompetence on the part of our Supreme Court justices. Because our Supreme Court is staffed by some of the best legal minds you would find anywhere in the world. I would attribute the unjust, absurd or plainly wrong decisions to legal sophistry, intellectual dishonesty, partisan politics or other parochial considerations, corruption (remember the petro station in Westlands?), hubris or judicial impunity. Or combinations of two or more of these factors. Meanwhile, I earnestly hope, even though I know it is unlikely, that the Supreme Court will feature in the envisioned referendum question(s).

A church in Homabay was turned into mosque