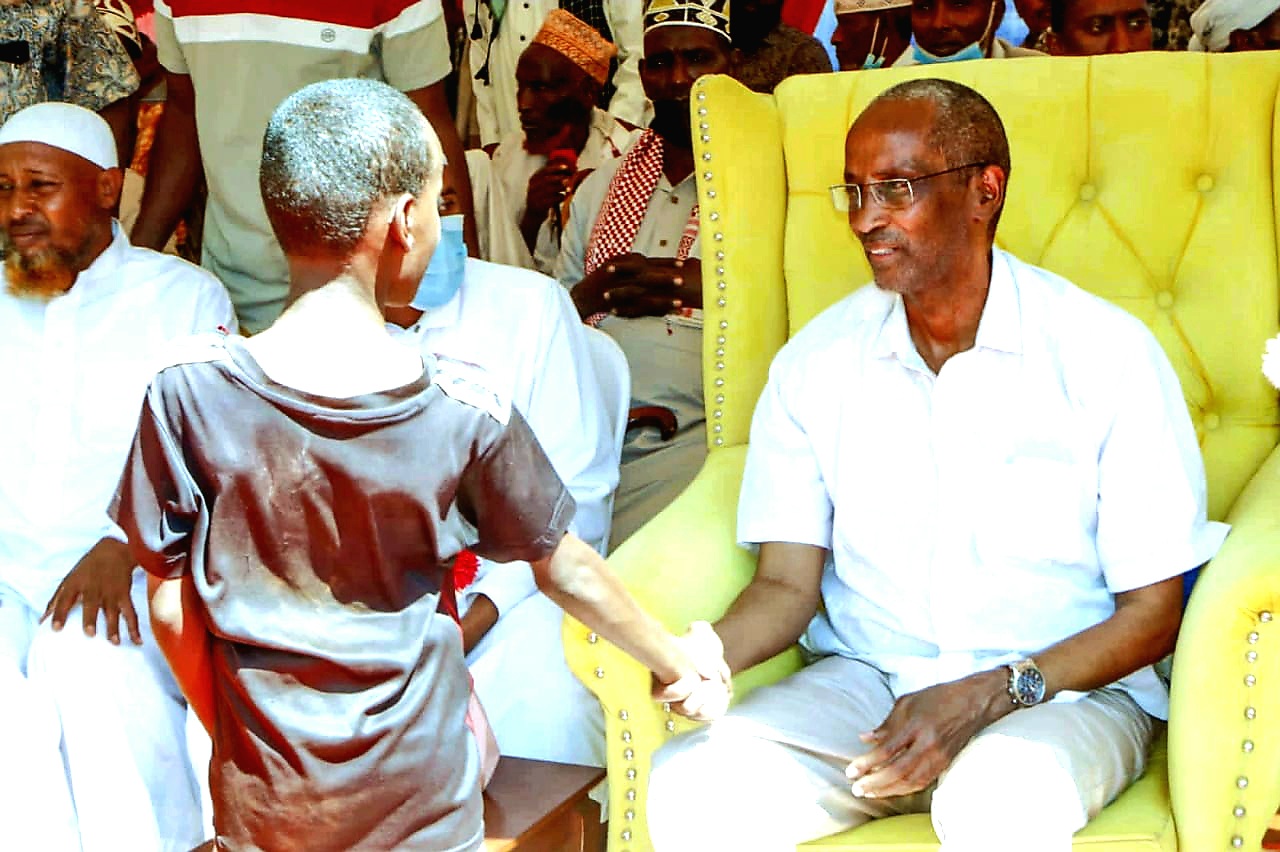 Dr Hassan Adan Fuje while greetings a boy during his first public rally in Wajir.

While declaring his bid for Wajir top post, Dr Hassan did not critisise the October Fai Sultanate verdict which favoured Hassan Wehliye, but challenged the community to use leadership quality and past achievements in the management of public entities as the yardstick to pick candidates.

“After a wide consultation with the elders, religious leaders, professsionals, women and the youth I became conviced more that ever that Wajir County needs a leader with the experience, the expertise and the knowledge to make the change it so desires,” said Dr Hassan who’s the former boss of the NHIF and proprietor of the Nairobi South Hospital.

“Today, I officially launched my campaign to be the next governor of Wajir County because among the problems Wajir has today, the health sector is the most ailing and needful of proper management,” he added.

He informed the crowd that if elected,  he will give up his salary “If you think I am in for the money” and vowed to set the reccuring problems in the health department “straight within three months.”

“Health is a human rights issue. It’s basic human neccessity. Because of my vast experience in this sector, if my people (voters) happen to choose me, I will be able to provide adequate healthcare services (in) all the six (health facilities),” Fuje noted.

He added that Habaswein, Eldas, Bute, Griftu and Tarbaj hospitals “must be elavated to Level Four and “It’s possible with the funds set aside for the Health sector.”

Dr Hassan was in 1995 appointed  the Medical Superintendent at the Pumwani Hospital. He was a member of a Presidential Task Force formed by the late President Moi to improve healthcare services in Nairobi province.

He became the Medical Officer of Health in Nairobi after his stint at Pumwani came to an end. Later, he was appointed as the Director of the Division of Family Health, responsible for the health of the mother and child in Kenya.

In 2002, he joined the Department of Primary Health Care as the director at the Ministry Headquarters. This was inclusive of all departments except hospitals.

Between 2003 and 2005, Dr Hassan served as the Chief Executive Officer of the National Hospital Insurance Fund (NHIF) The organization had two main challenges during this period: it was suffering a major public relations crisis and needed swift action to regain public confidence since the giant public firm was facing a number of scandals.

Dr Hassan joins other politicians from the region who distanced themselves from the highly critisised Negotiated Democracy such as Garissa Township MP, the CAS for Education Hassan Noor and Ugaas Sheikh who, just like Dr Hassan, was asked to heed to the Sulatane verdict but went ahead with his own campaigns.

Dr Hassan’s bid announcement comes just a fortnight after section of the religious leaders from Wajir submitted an appeal to the Sultanate, demanding for revion whose result is expected to be announced on January 15th.

“We admit tens of patients from Wajir every month at the Nairobi South Hospital. The refferals are so basic that it can be done here in Wajir County. Some patients can’t afford the cost of a private hospital and alot of times, we would be forced to give them significant discount or treat them for free at worst case scenarios,” Hassan noted.

“If you won’t elect me, don’t come to my hospital because I laid down for you the solution,” he jokingly added, causing laughter and nods of agreement. “It was just a joke. Nobody will ever be stopped from my hospital (Nairobi South Hospital)

“We respectfully disagree with the outcome and seek that the decision shall be set aside,” the letter addressed to the Fai Sulatane and signed by the four clerics under the Muntada Ulama Fai, said in part

The clerics insisted that for the confusion to settle,  they asked the Sulatane to unveul the scorecard that saw the endorsement of Hassan Wehliye.