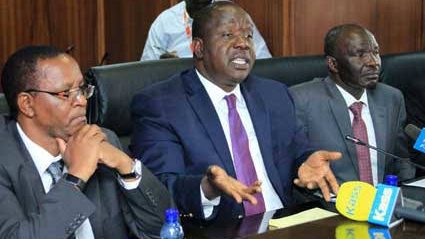 The story is told of a shepherd who one day discovered lion cubs where he was grazing his animals. He took the cubs in and decided to take care of them as they were too young. The cubs grew so fast and as each day went by, they kept telling themselves we are bigger than anyone.

In fact, they would shout to the sheep, all little sheep you sleep outside, while we sleep inside, who will ever help you. We own this house, they would shout. We do want we want and only the owner of this House can tell us what to do.

The cubs had now become lions that threatened to bite everyone including the wife and children of the shepherd. One day, the shepherd decided that the lions were now grown enough and decided to take them to the forest for them to fed for themselves. The lions were finally in the jungle where they had to hunt to survive and unfortunately, they could not cope so they finally faded away.

This story is similar to our history as Kenya. It paints a picture of how as change of leadership has evolved from our founding father Jomo Kenyatta to present, so has public officers in charge of institutions changed faces. Public Officers should however take the story of the lions and the shepherd to heart.

Circumstances do change, so do public officers come in and go. Being in position of power, should never get into your head. We are servants of the people. Positions change. What does not change is the purpose for which one is appointed which is for public service. This should remain at heart.

More so public officers should not also forget history. Each regime, each government, each phase of governance has a cyclic cycle. One which by now is as sure as that tomorrow if you wake up, the Indian Ocean will still have water.

In each cycle, there are public officers when they take office grows from being humble as the sheep to being eager to roar like cubs to roaring like lions. Unfortunately, the roar sometimes becomes too loud, uncontrollable and deafening and they forget everyone. The become ever bigger than the owner.

They are bigger and can bite everyone who rattles them. However, just like the shepherd finally took the lions to the jungle, as governments change, new people come in, circumstances change and humble them. Most of them are not able to cope and they just fizzle away.

In the Jomo Kenyatta government, you would recall there was Mbiyu Koinange, Charles Njonjo who was known for his signature umbrella or rather umbrella walking stick with matching black striped suit and Kihika Kimani and no sooner had they become the name of the game than in came Moi’s government.

In this one, Nicholas Biwott, George Saitoti, GG Kariuki, PS Oyugi and Zakayo Cheruiyot were the game players. These were the times of Kanu ni Chama ya Mama na Baba but no sooner had they also become the name of the game in came Kibaki where we had Christopher Murungaro, Kiraitu Murungi, Dave Mwangi and George Saitoti. Again, these also became forgotten.

In fact, its sad that David Mwiraria who once was a Finance Minister and a shrewd and astute public officer would later spend most of his time being humiliated battling court cases one from another and unfortunately no one remembered his hard work. No one remembered to protect and shield him from malice and false accusations until his death.

Fast forward, we had Kibaki in his second term where the game players were Amos Kimunya, Kimemia now governor for Nyandarua and Michael Gichangi. In my view Amos Kimunya now an MP knows the cyclic cycle of governance more than any public officer.

In his final phase in Kibaki’s government he ended up exclaiming loudly “I better die than resign”, he had finally realised how fast public offices and positions evolve. Today, he is the greatest contributor of debate in the National Assembly and I am now told he is one of the most soft-spoken MPs and lastly spoke loudly during his resignation debacle!

Moving on, in His Excellency the President Uhuru Kenyatta first term we had Waiguru now governor for Kirinyaga County and Former Principal Secretary Engineer, Michael Kamau just to mention but a few.

Ms. Waiguru you would recall moved from being the most powerful Cabinet Secretary in charge ofDevolution to being associated with “lighter duties” phrase. Engineer Michael Kamau is nearly going what David Mwiraria went through, alone and dejected.

Presently, we now have Cabinet Secretary for Interior, Fred Matiang’i and his principal secretary, Karanja Kibicho. I have heard that the two are even exclaiming that they can only receive instructions from a single person without realising the Presidency is a dual office and an institution that should be respected.

To these two, they should learn from history.

To these two, they should remember circumstances do change.

To these two, public service is devoid of politics, it is service to the people.

To these two, if in doubt ask Amos Kimunya on his experience.

To these two just incase they have forgotten, “vinduvichejanga’’!

Aden Duale is the Leader of Majority of the National Assembly and Garissa Township MP.