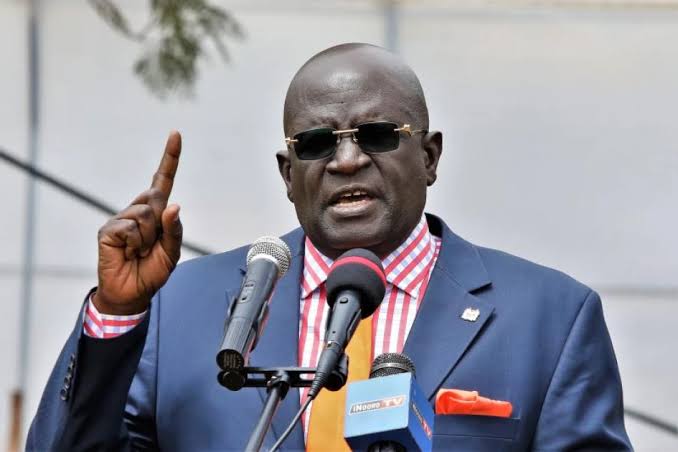 In a press conference on Tuesday at Jamia Mosque in Nairobi, the Muslim leaders, led by Supkem Chairperson Hassan Ole Naado, rebuked recent utterances from the CS.

The calls from the Muslim leaders come in the wake of remarks attributed to the CS and directed at an NTV reporter at public event in Nairobi over the weekend.

The journalist had asked the CS a question after making an address, but in his Magoha said he would not answer a question from a journalist representing Al-Shabaab.

But now the leaders have said the Muslim community is gravely concerned by the incident, saying it is unfortunate for a public officer of Magoha’s stature to make such utterance.

“We are calling upon the NCIC to take immediate action against the CS, the Media Council of Kenya to take it up and President Uhuru Kenyatta the appointing authority to sack the CS,” Ole Naado said.

He said that such utterances from the CS will undermine the provision of the constitution and human rights to religion, human dignity, and press freedom.

“It also undermines efforts to eradicate violent extremism one of the greatest security threats to this country. It exposes this lady and all Muslim girls and women to danger.”

Garissa Township MP Aden Duale said such islamaphobic tendency has no place in Kenya. He termed the the minister’s action “shameful” and a “gross misconduct.”

“The video footage doing rounds in the media showing the Cabinet Secretary responsible for Education, Prof. George Magoha a Senior State Officer in the government publicly harassing and profiling a female journalist based on her origin and religion and insinuating that she is a terrorist is quite sickening!” The former Majority Leader and one of the senior Muslim politicians, said in a statement.