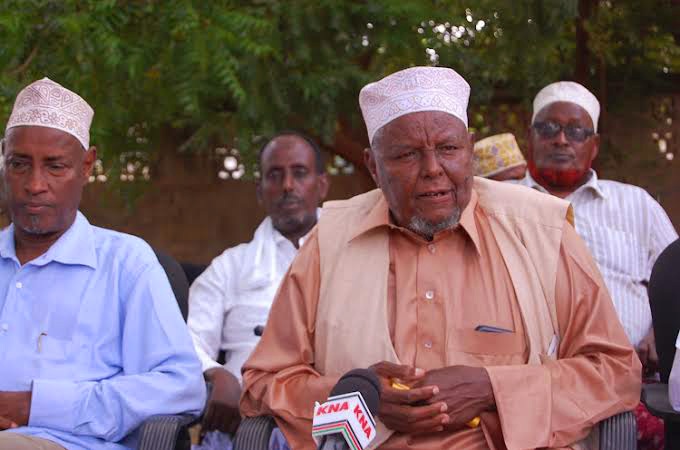 GARISSA—Governor Nathif Jama today dispatched eminent elders accompanied by security heads from Garissa to mediate and dialogue with their counterparts from Kitui county following the outbreak of clashes between camel herders from Garissa and local farmers in Malalani area of Mwingi sub county in Kitui county.

The elders from Garissa met with their Kitui counterparts to find ways to quell the clashes and lower tensions that has seen camels attacked and property worth thousands destroyed.

At the end of the meeting, they resolved:

1- To immediately cease and desist conflict over water and pasture, and embrace peaceful coexistence between Somali herders and Kamba farmers.

2- It was agreed, to protect farming lands owned by the host community and these lands should not be used as grazing zones by the herders.

3- That, the cruelty and forceful evictions of animals from grazing zones, must be immediately stopped and further, the pastoralists should share in the meager water and pasture resources available and embrace peaceful coexistence with the locals during this trying moments.

It was also agreed that anyone who goes against the laid down resolutions would face the law and action must be taken to avert any further escalation.

Eastern Regional Commissioner, Evans Achoki put politicians on notice over incitement in the matter saying that the area Security Team will deal ruthlessly, with any act of lawlessness.

“We will do all that is within our powers to ensure there is peace in our counties. We will deal with any lawlessness with full force of the law,” said Achoki.

North Eastern Regional Commissioner James Kianda called on the warring parties to set aside their differences and uphold the long running robust relationship that has existed between the two communities since independence.

“I call on those people living along the border to take responsibility and work together to minimize tensions between the two communities and end the unnecessary loss of animal lives and other property,” Kianda said.

“We are living with our Kamba brothers and sisters peacefully in our counties, not only in Garissa, but across the entire North Eastern region. We cannot start fighting each other now during this period of prolonged drought that is almost sweeping all our animals. We need to share the little resources and respect the dignity of our strong bond,” Mzee Dubat Ali Amey said.