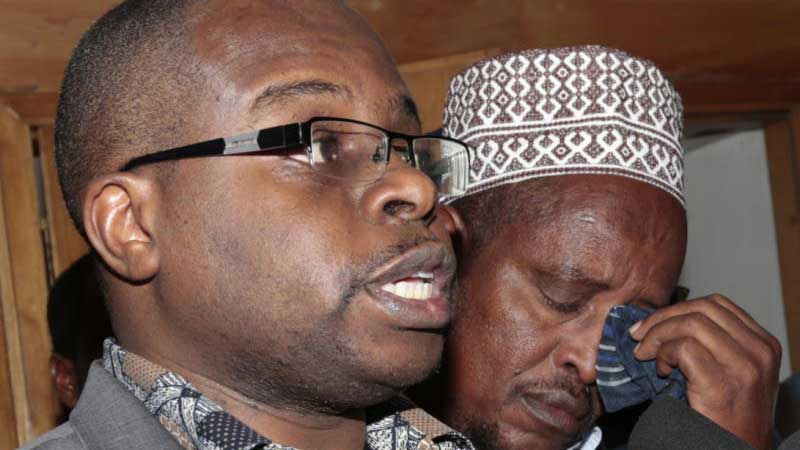 NAIROBI—The father of  former Garissa county minister for finance and economic planning has resigned from his job citing frustration.

Speaking today at the Milimani Law Court in Nairobi, Mukhtar said he lost hope in finding justice, adding that he would move to Dubai to care for his son who is fighting for his life after he was shot on the head on August while leaving Kileleshwa mosque.

Aden Mukhtar, a longtime educationist, resigned from his post as the principal of Garissa Teachers Training College.

“I cannot serve as a principal in a government institution and still criticise the DCI (Directorate of Criminal Investigation) and DPP (Director of Public Prosecution). I want to thank the TSC (Teacher Service Commission) for accepting my resignation,” he said while briefing the press.

Grieving the pain of his son and despair registered all over his face, Mukhtar stated that he on flight Wednesday evening to join his son in hospital in India, saying his lifetime investment  “is laying in the ICU.”

“We the civil servants don’t run business and other ventures. We work to invest on the future of our children.” he said, adding that: “When the son you’ve invested on is laying on a hospital bed unconscious, you don’t have much option,”

“I’m leaving the country an angry and disappointed man. I cannot see justice served at the end and that makes me bitter,” he noted.

Mukhtar stated that the county governor of Garissa, Ali Korane was behind the shooting of his son. He also identified Korane as the individual derailing the wheels of justice.

“Go to Garissa today and ask a 6-year old about the person behind the shooting of my son. They will identify the governor,” he alleged.

Garissa governor, Ali Korane has previously denied knowledge of the shooting of Idris Mukhtar. The man identified by the police as the assailant with the gun that drove the bullet into Idris’ skull  has since died in police cells in what the police said was suicide.

At the height of the probe to identify Idris shooters, the DCI arrested and questioned the governor for his alleged links. He was later released but identified as person of interest in the investigations.

“It doesn’t matter whether justice is served or not. I know (Governor) Korane is the person behind my son’s fate,” Mukhtar said when Kulan Post sought for further clarification.

Idris Mukhtar was previously Korane backer. He even contributed to his campaign trail in last year’s election.

Idris and Korane fell out over unfulfilled promises. Before he was shot, Idris was a prime witness in at least nice cases touching on corruption and the governor’s academic credentials.

Can affidavit be accepted as evidence and what should we expect from the Supreme Court on Monday?