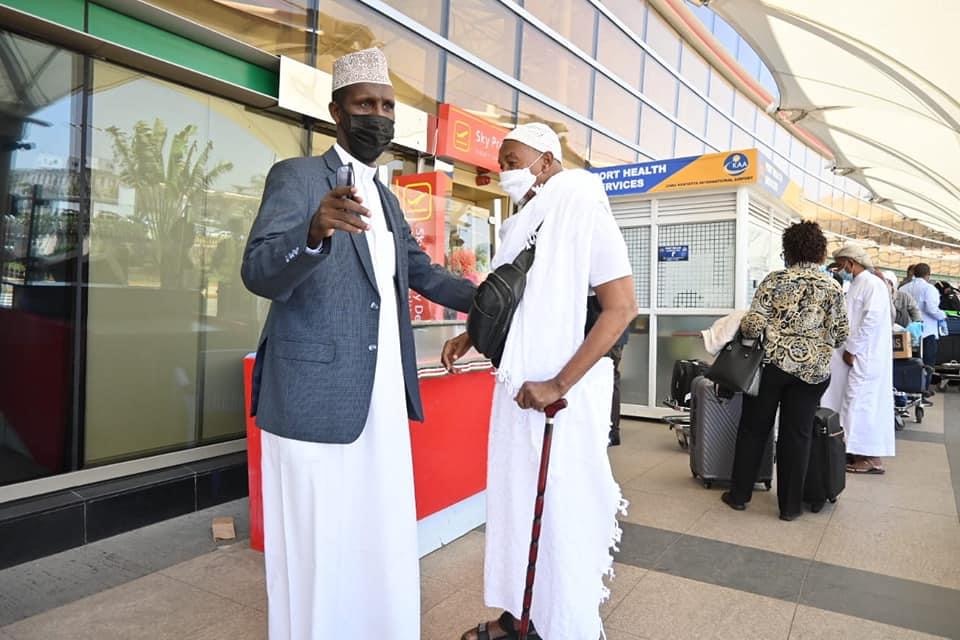 NAIROBI—The first batch of pilgrims to the Islamic holy city of Mecca, Saudi Arabia left on Wednesday morning from the Jomo  Kenyatta International Airport. The pilgrims were fortunate to be among the first to visit the Kaabah in two years due to the Covid-19 restrictions.

While seeing off the piligrims, SUPKEM Northeastern regional head, Dr Yunis Sheikh Ibrahim noted that the resumption of the religious travels was a sigh of relief for thousands of Kenyan Muslims who missed the opportunity since the outbreak of the global pandemic. He also thanked the Kingdom of Saudi Arabia for facilitating the return to normalcy.

“On behalf of the Supreme Council of Kenya Muslims (SUPKEM) National chairman Mr. Hassan ole Naado, I want to take this opportunity to offer my sincere appreciations to the Kenya and the Saudi Governments in the resumption of pilgrimage whose purposes is connect with Allah (sw) and collect his countless rewards associated with this act of worship,” Dr Yunis said.

The lesser pilgrimage, Umrah, was suspended alongside Hajj but reopened in November last year under strict conditions which include an age limit between the age of 18 to 50 years of age, A PCR test with a negative result done within 72 hours before departure to Saudi Arabia and a quarantine period of 3 days upon arrival in the country.

Hajj is a an annual celebration held in Mecca, Saudi Arabia, on Dhul Hijjah, the twelfth and final month of the Islamic Calendar.

Earlier, nine countries including Egypt and South Africa were suspended from performing Umrah, a holy celebration conducted in Mecca during Ramadhan.

Is Ahmed Muhumed ”Caato” going for the Wajir senatorial post?