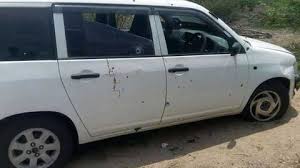 WAJIR—At least four police officers were on Monday killed when a vehicle they were traveling in was targeted by gunmen in Liboi, Garissa County.

According to police statement, the officers were traveling in a Toyota Probox when they ran into an ambush between Liboi and Kulan area.

The assailants are believed to be from Somalia and have reportedly left with the officer’s guns.

“They were ambushed and shot before being robbed of their weapons. It was an ambush,” said an officer aware of the incident who spoke to the Star newspaper.

“The officers were robbed of three AK47 rifles and unknown number of bullets,” the report comfirmed. The incident is the latest to happen in the area.

North Eastern police boss Rono Bunei said they had intensified operations in the area to tame the militant’s movements.