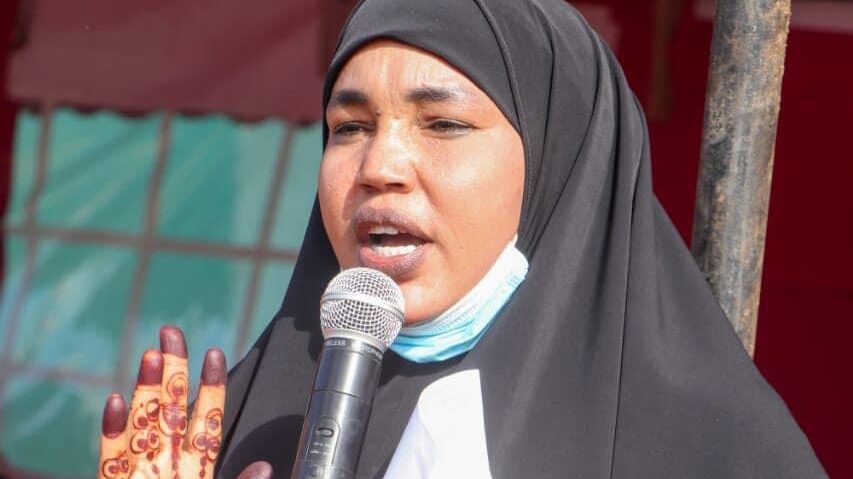 At Masalani in 2017, she was endorsed alongside the late senator Yusuf Haji and the incumbent governor, Ali Korane. All attention was on the gubernatorial race and little was given to the position of the woman representative to which Anab was seeking. Other women hopefuls were asked to step aside in honour of the Samawathal treaty and just like that, Anab was on her way to victory given the fact that her challenger for the seat, the former women rep, was drowning under the pressure of incumbency.

For the following two years, Anab was hardly seen in public rallies save for few meetings and project-launching events in Garissa. The trend continued until she started actively appearing in “Inua Mama” movements that was in support of the Deputy President, William Ruto.

For the first time, Anab started making headlines and along the way, she begun curving a niche for herself in the national politics. At one point,  Anab jokingly declared that she would name her child after William Ruto.

All the while, Anab was gaining influence in the top circles that make up the support base of the deputy president and his bid for the 2022 presidential elections.

According to people close to her, the “Inua Jamii” movement gave her the political ability to define her own space in the succession politics of the DP. That meant only one thing—getting out of the shadows of Garissa MP, Aden Duale.

Since her decision to go on her way, the relationship with Duale was on a down trajectory. Their antagonism reared it’s head just recently when the post of county coordinator for the United Democratic Party (UDA) came up for grabs . Both Anab and Duale tried to lobby for the post to be granted to one of their preferred candidate. The matter become so intense to the point it attracted the attention of Ruto who called for a truce, and the matter is still pending.

In protest, Anab mended relations with the county governor in a surprise change of camp.

“He (Korane) is my elder brother and we share a common knowledge of what the locals are going through. That’s why we decided to work together so that the people’s need can be taken cared of,” Anab said when asked about her political about-turn.

Just over a week ago, she sought the endorsement of a section of Abudwaq clan elders. She became the first woman to be endorsed for the seat of the MP for Fafi.

“My brothers who were jostled out should find some solace and work with me to forge a cordial relationship to catapult the community’s needs forward,” she declared.

She continued that: “I welcome them to the hustlers train that will push the needs of the common men and women to higher levels.”

However, Anab is accused of using her office to empower section of the Fafi constituency. She denied the accusations, saying the NGAAF allocations were distributed in equal measure as per the varying needs of the locals.

All this year, the Garissa woman rep has been on a struggle to peel off her “simple, hold-it-back” attitude and get down with her male competitors.  She is turning out to be headstrong, obstinate and wholly self-opinionated. She is no longer the reserved Anab and that she’s making it clear to all and sundry.