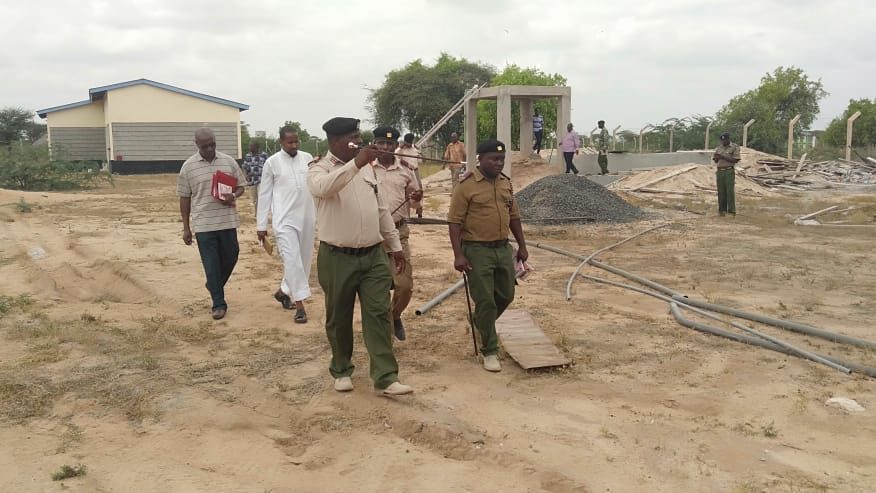 By: Jacob Sangok for KNA

GARISSA—Contractors  who  drag implementation of projects despite receiving payment from the government have been put on notice.

It emerged during the inspection that Sh.99 million has been paid to the contractor with 90 percent of the staff houses complete while the office block is over 70 percent complete.

The project that kicked off in 2012 and was supposed to have taken two years but stalled midway because of lack of funds. In late last year after the Ministry of Interior paid Sh.18 million to the contractor.

Mwangi said contractors dragging their feet on government projects do so to delay completion date in order to seek cost variations.

The CC said that going forward, the cost of delays will be passed on to the contractor unlike the current arrangement where the contractor has always had an upper hand.

“We have incidents where a contractor has been paid over 50 per cent for a job while on the ground he has delivered about 30 per cent. This will not be entertained anymore. The government must get value for money. Gone are days when contractors used to inflate costs to make abnormal profits on government projects,” Mwangi said.

Mwangi said the CDICC will continue to closely monitor all ongoing projects to ensure that they are done according to specifications and delivered on time.

“No government project is complete until it is not only completed but also utilised for the intended purpose,” he added.

He called on the contractors to exhaust all the funds they have been paid before seeking for cost variation.

Birik said the old days are long gone when contractors colluded with rogue government officials to falsify progress reports of projects to be paid only to vanish.

In the past, some contractors have been blamed for taking advantage of insecurity and the vastness of the region to carry out shoddy work because government officials rarely visited to evaluate the projects.

Some of the major projects undertaken by the national government in North Eastern include the Sh12 billion solar plant in Raya, Garissa county launched by President Uhuru Kenyatta late last year. The project added 54 MW to the national grid.

Others are the tarmacking of the 165km Nuno – Modogashe road which, according the Kenya National Highways Authority, is 95 per cent complete and the building of several dams and water pans through the Northern Water Service Board.