Hafsa: A note I slipped through a window opening saved my life 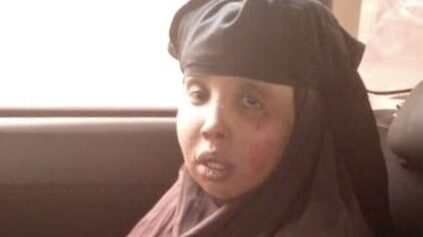 NAIROBI—A week ago, two business friends from Kamakunji area of Nairobi went to Kayole to inspect a new business joint they were planning to invest in.

Hafsa Abdulwahab and her namesake, Hafsa Lukman left Kamukunji market towards sunset on Monday last week and arrived at their destination minutes to 7pm.

Unbeknown to the two, a group of men were planning for them an ordeal that would last for more than a week and a fratic search to save them.

Unfortunately, one of the two business lady—Hafsa Lukman—was attacked from behind while observing evening prayers (maqhrib), wrestled to the ground and blindfolded. The attackers stuffed her mouth with plastic bottle to prevent her from making a noise.

“They then put me in a water tank to avoid suspicion,” Hafsa told Kulan Post in her first media interview at Nairobi Women Hospital where she’s recuperating.

Her account was supported by a statement by the Directorate of Criminal Investigations (DCI) .

“Hafsa Mohamed Lukman the Kamukunji based businesswoman who disappeared on June 15, has finally been rescued by detectives, from her captors. The 23-year-old woman was found at a dingy room in Matopeni, within Kayole, where she had been forced to fit in a water tank,” a statement by the DCI said on Sunday morning hours after she was rescued.

Hafsa who was last seen at her clothing shop was kidnapped by a criminal gang, that demanded a ransom of Sh5 million, in exchange of her freedom.

While narrating her ordeal, Hafsa recounted that her captors cut her hands and legs and used violence to force her fit into the tank.

“The video in circulation where I am making the financial appeal was recorded the same night I was kidnapped,” Hafsa recollected. She was held in a small,dark room.

She added that the injury on her lips was due the bottle that was stuffed into her mouth while the blood was from the hands.

“It was not acid attack,” Hafsa confirmed

For the following four days, Hafsa hardly ate food because the abductors were thrown into frenzy, leaving her unattended. According to detectives who spoke to Kulan Post, the abductors did not anticipate for the leakage of the video and the subsequent public reaction and attention it created.

“The five days felt like a day…and I was constantly praying for my safety,” she noted.

On Saturday, Hafsa narrates: “Fearful that any failed attempt to free myself would cause my death, I wrote a note with my name and number to contact.

“I then slipped the note between a space on the metallic window. Children who were playing nearby collected the note and that’s how the police got a whiff of my whereabouts,” Hafsa said, adding that all through, her captors were visibly worried that a contingent of DCI detectives were combing the area for clues.

Her father, Mohamed Luqman thanked the police for the professional handling of the matter. He also accused Hafsa Abdulwahab, the other missing woman, of being behind his daughter’s woes.

His accusations was swiftly denied by Hafsa Abdulwahab’s family who challenged him to produce evidence of “his wild accusations.”

Hafsa Abdulwahab’s family members were still camped at Kayole police station, seeking answers six weeks after she was registered as missing. Severally, her death was announced on social media but later retracted.