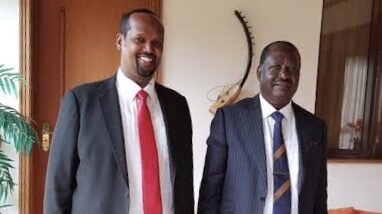 MANDERA—While in Murang’a on Sunday, Opposition Leader Raila Odinga told the residents at a marketplace that one of proposals in the Building Bridges Initiative (BBI) was the call for the one-man-one-vote-one-shilling formula. He said the push would have seen Murang’a county receive additional billions due to its large population.

Mr. Odinga added that as it stands, it was not fair for counties in the North Eastern Kenya, especially Mandera County, to receive more allocation from the government due to their geographical areas as compared to central Kenya counties which has a larger population.

This statement attracted a lot of attention from numerous Kenyans who accused the former primier of undermining the North Eastern counties and their place in the devolution funds allocation.

In response, Mandera political and opinion leaders have condemned the comments by Raila Odinga, saying it was misplaced in favor of Central Kenya.

Raila Odinga on Tuesday clarified his statement saying Kiambu deserved more allocation without slashing what goes to Mandera in the devolution funds.

The Rise and the Fall of Keynan: How youngsters felled a giant