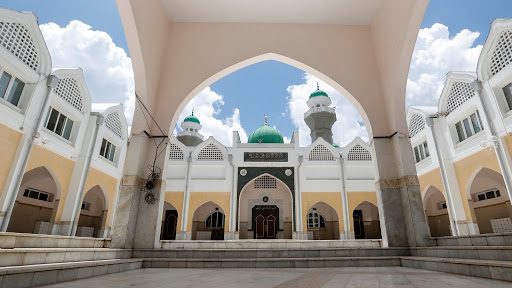 NAIROBI—Jamia Mosque Nairobi shall remain closed for regular five daily prayers  due to the impracticality of the 100 persons limit announced last week by the government.

This week, saw the commencement of the gradual phase of reopening of houses of worship which saw some mosques reopening subject to adhering to a maximum of 100 congregants. The four-phased approach began with a pre-opening phase on Tuesday and will be followed by phase 1 where access to houses of worship will be guided by capacity and social distancing.

With its location in the heart of the Central Business District (CBD) coupled with its capacity which in normal circumstances accommodates over 10,000 worshipers, it was impractical for Jamia, the country’s biggest mosque to open only for 100 worshippers in the pre-phase period.

“Following widespread consultation with Muslim members of the Inter-Faith Council and our Da’wah committee members, we regret to announce that we shall not be opening Jamia Mosque on July 14, 2020, as envisioned.  This is because the guidelines issued to limit prayers to only 100 persons per session are not practical for Jamia Mosque Nairobi given its centrality in the Central Business District of the capital city, Nairobi,” read the statement issued by the secretary-general Abdul Bary Hamid.

“The number of employees of Jamia Mosque are more than 100 and opening up the mosque will mean that even outsiders will not be allowed in the mosque for prayers. It is not practical to reopen the mosque going by the current guidelines,” the administrator Said Abdallah further explained.

Last week, the Inter-Faith Council which brings together representatives from the Muslim, Christian and Hindu faith announced that places of worship are free to re-open partially this week but in strict adherence to the protocols put in place by the Ministry of Health to contain the spread of coronavirus.

Following the statement, several mosques also announced that they will not be opening their doors to worshippers as they continue to assess the situation.

“Keeping in mind and most importantly our Islamic obligations, we Parklands Mosque and Madrassa Trust and the management committee of Kenya Arab Friendship Society, we have consulted with medical experts and Ulamaas to come to conclusion that presently Parklands Mosque and Masjid Rahma (Hurlingham) will regretfully NOT open for congregational prayers. The trustees and management committee will review and assess the situation from time to time and keep the community updated,” read part of the joint statement issued by the two mosques.

Other mosques in Nairobi that are yet to reopen include Masjid As-Salaam South C, Adam’s Masjid, Park Road mosque and Imtiaz Mosque in the CBD among others.

Some of the mosques which have opened and are enforcing the social distance rule include Masjid Abubakar and Hidaya Mosque in Eastleigh as well as Al Amin Mosque, Juja Road Estate in Pangani area.

In the advent of the Coronavirus pandemic, Jamia Mosque on March 18 shut its doors to worshippers becoming the first house of worship in the country to close its doors as a means of preventing the spread of the deadly coronavirus epidemic. Four days later, the government announced the closure of all mosques, churches and other places of worship after the country witnessed an upsurge of Covid-19 cases.

The first phase will be next stage of the reopening process of houses of worship and this will be guided by the capacity of the mosque and social distancing rules.

In readiness for the reopening, the Jamia Mosque Committee had already taken measures to provide a safe and conducive environment for prayers in the unfolding COVID-19 situation.

The measures include removing carpets from all the entire sections of the mosque and this will see all congregants required to carry their own prayer mats. Additionally, worshippers will have their temperatures taken before accessing the mosque, sanitize or wash their hands and always wear face masks while inside the mosque.

Due to the social distancing rule, the mosque will only be able to have a capacity of 1,300 worshippers when it is fully open.