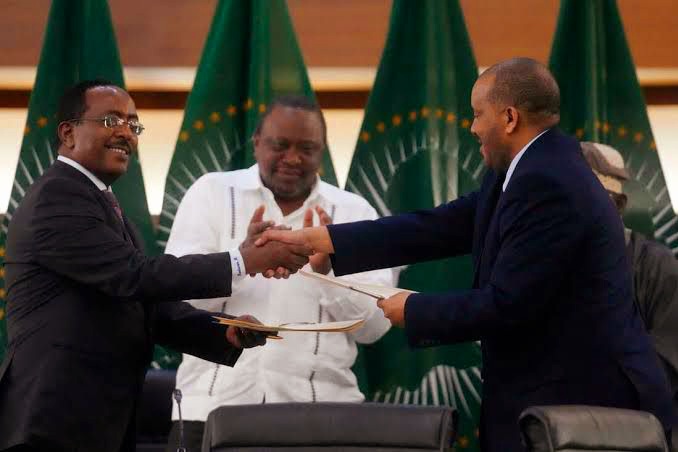 NAIROBI—The Government of Kenya has commended the parties to the Ethiopia peace process; the Government of the Federal Democratic Republic of Ethiopia and the Tigray Regional Government for signing a Peace Agreement on Wednesday.

President Dr. William Ruto in a statement, applauded Prime Minister Aby Ahmed and the leadership of Tigray for their bold step towards restoring peace in Ethiopia.

President Ruto saluted the people of Ethiopia, for whom he wished “an era of cohesion, integration and reconciliation.”

Nairobi said the commitment demonstrated by the two parties to the African Union-led peace process aligns with “our collective desire for peace and security within our region.”

As a member of the Inter-Governmental Authority for Development (IGAD), Kenya said it joins the world in “complimenting our Ethiopian brothers and sisters for the step taken to cease hostilities, open up humanitarian corridors, and restore services.”

“This mutual agreement will create the necessary environment to nurture durable peace and political stability in Ethiopia,” read part of the statement by the State House.

“I commend the AU Panelists, H.E. Olusegun Obasanjo, former President of Nigeria and AU High Representative for the Horn of Africa; H.E Uhuru Kenyatta, former President of Kenya; H.E Phumzile Mlambo-Ngcuke former South African deputy President, for their facilitation and tireless efforts, wisdom and patience, and most of all, for their unity of purpose that brought this day of peace that heralds a bright future for the people of Ethiopia,” President William Ruto added.

STATEMENT BY H.E. HON. WILLIAM SAMOEI RUTO, PRESIDENT OF THE REPUBLIC OF KENYA AND COMMANDER-IN-CHIEF OF THE DEFENCE FORCES, ON THE ONGOING AFRICAN UNION LED ETHIOPIA PEACE PROCESS.

He thanked the people and the government of South Africa for hosting the Ethiopia peace talks.

“In light of our regional spirit of collective action, I urge our Ethiopian brothers and sisters to seize the opportunity provided by this agreement to usher in a new era of peace and prosperity for their beloved country,” the statement further added.

Ruto reaffirmed Kenya’s continued commitment to support the next steps in the peace process.

“I therefore call upon the international community to intensify support for the mediation team as well as the respective parties, to ensure timely and binding outcomes,” he said.

The Ethiopian government and regional forces from Tigray agreed on Wednesday to cease hostilities, a diplomatic breakthrough coming two years into a war that has killed thousands, displaced millions and left hundreds of thousands facing famine.

Just over a week after formal peace talks mediated by the African Union (AU) began in the South African capital Pretoria, delegates from both sides signed an agreement described by an AU official as a “permanent cessation of hostilities.”

The war stems from a catastrophic breakdown in relations between the Tigray People’s Liberation Front (TPLF), a guerrilla movement turned political party which dominated Ethiopia for 27 years, and Abiy, who was once part of their ruling coalition but whose appointment in 2018 ended the TPLF’s dominance.

Escalating tensions in 2018-20, including over Abiy’s peace deal with the TPLF’s sworn enemy Eritrea, and the TPLF’s decision to defy him by holding regional elections in Tigray that he had postponed nationwide, tipped the feuding parties into war.