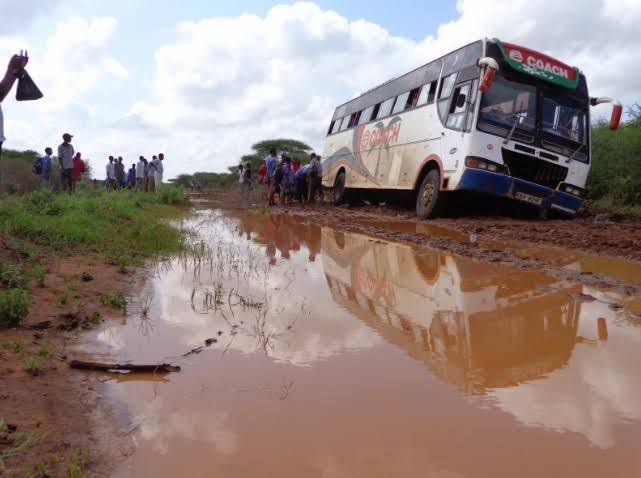 GARISSA—After a long spell of drought that left thousands of livestock dead in Ijara Constituency for the last one year, heavy rains have continued to pound the area making roads impassable.

Motorists using Landcruiser trucks and four-wheel drive vehicles have sometimes been forced to spent a night in the bush before reaching Masalani town.

Passengers boarding Dek Express commuter bus move from Garissa to Boji where they are dropped and wade through crocodile-infested River Tana15km to Majengo Bridge to catch another Dek express bus waiting passengers on the other side of the river after river Tana burst its banks on Boji side.

However the manager of Dek Express bus company  Haret Farah said they had no alternative but to use that method where passengers alight from the buses and wade through the Boji flash floods to reach other destinations where the other bus  waits to carry travelers.

Those who were planning to spend their Christmas festivities elsewhere are either stranded in Masalani or Garissa or opt to risk wading through the boji floods.

Ijara Deputy County Commissioner  Willy Kemboi and Kenya Red Cross Ijara Coordinator  Daud Ahmed Shalle called on residents to avoid the flooded area unless its necessary and advised those living in lowland plains to shift to higher ground as the rain is expected to intensify for the next one week.

Students who were to go for the Christmas holiday festivities are compelled to stay with their kin until the roads are passable possibly in early January 2022.

Lorries carrying merchandise and vegetables are stranded at Boji plains as the river has flooded 15km on Boji side in Tana River County.

In the interior, especially  Sangailu laga has flooded at Gabaya check point where the water can overrun the vehicles.

Residents have appealed to the Garissa Governor Ali Bunow Korane  and his Tana River counterpart, Major (Rtd) Dhadho Godana to gravel the 15km Boji Road with the help of business community and the Members of Parliament to ensure that the residents do not suffer on the road.