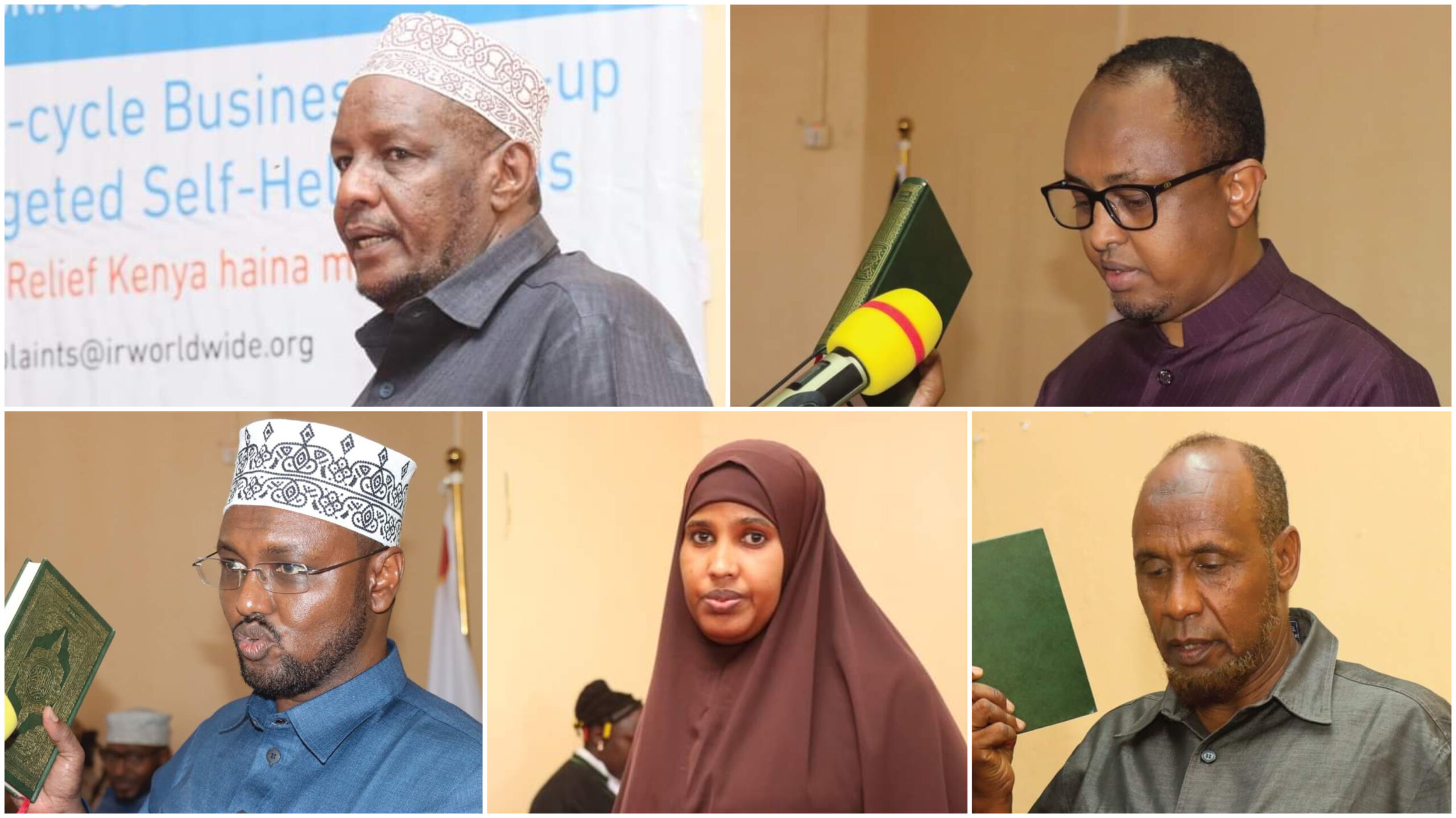 Issa Garore Irobe holds over 30 years experience in the civil service. Until his appointment as CECM, he was the immediate former Member of County Assembly for Tarbaj Ward between 2017 to 2022.

Before joining politics, Issa was a career teacher where he served from 1985-2005, rising through the ranks upto the school headmaster. Some of the schools he served include Jogbaru, Wagberi, Leheley, Dambas, Tarbaj and Catholic primary schools.

In addition to his leadership service as a headteacher, Issa Garore also served as the ECK (Now IEBC) as the Wajir District Election Coordinator.

Other positions he held in the past include District Officer (DO) and Chairman of the County Land Management Board working under the National Lands Commission.

Issa has also received training on Public sector Governance, Budgetary Reforms and Best Practices in Public service Delivery by Eastern and Southern Africa Management Institute in the UAE. He holds a Bachelors of Education degree from Kenyatta University.

Mohamed is a certified public accountant CPA(K) and an (ICPAK) member with good standing. His wealth of experience cuts across the public and private sector.

He returns to serve Wajir County where he was previously an Economic Advisor to the County Government during the tenure of Governor Ahmed Abdullahi.

Hussein enjoys a great understanding of Wajir County gained during his time at WASDA where he served as the Chief Finance and Administration Manager and Deputy CEO; Finance and administration for a combined period of 10 years.

He has served at Jabavu Village Limited, Rolling Cargo and Shipping Company Limited and Kenya Institute of Curriculum Development.

Farhiya, is one of the youngest CECM and holds over 10 years’ experience in Management specializing in administration, executive decision-making, strategic planning, results-based management and public policy analyses.

A two-time candidate for the Women Representative position, Farhia has worked in various institutions both in the public and private sectors where she was charged with developing and implementing projects, offering technical support as well as overseeing program initiatives that drive growth using new approaches.

Farhiya has previously served the Wajir County Assembly as an advisor to the Speaker and Members of the County Assembly providing guidance on legislative process and parliamentary procedure and practices.

Khalif Abdi is a career civil servant and a seasoned administrator who has served in the public sector for a period spanning over 40 years where he held different roles including working as a District Officer and Deputy County Commissioner until his resignation in 2017 to join politics.

He is an expert with a solid background in government processes, Policy Formulation, Resource mobilization, Dispute Resolution, Community Development, Personnel Management and Advocacy.

contribution such as increasing the County irrigation water pans, leading the solarization of farms, food productivity and reduced farm costs.

He has also served as Chief Officer in the departments of fisheries, and decentralized unit in an acting capacity. Khalif Abdi has studied Bachelors of Governance and Development at MS Training Centre for Development in Arusha, Tanzania. He has also studied Agricultural Engineering at Eldoret institute of Agriculture.

He has also attended various Senior strategic leadership, Advanced Public Administration and Management Courses at the Kenya School of Government.

Habiba Ali Maalim is a consultant obstetrician and a medical practitioner with 20-year experience specializing on Maternal and child healthcare. Until her appointment as the CECM Health, Habiba was based in Gedo Region, Somalia working as Nurse/Midwife Coordinator, with International Irish NGO, Trocaire.

Habiba started her medical practice in Wajir County Referral Hospital then known as Wajir District Hospital in 2001, where she was the Nursing Officer-In-Charge of Maternal and Child Health. She was later transferred to Garissa General Hospital to serve in the same capacity for a period of three years.

In 2012, Habiba Ali Maalim was moved to Mbagathi County Referral Hospital in Nairobi where she served in various positions such as Head of Reproductive Health Department, Continuing Medical Training Coordinator and Nurse Services Manager.

Ahmed Mohamed Wardere is the Youngest CECM at 34 years. Wardere possesses over 10 years’ experience in teaching, working under the Teachers Service Commission.

He started his teaching career in 2009 at AMA primary school in Wajir where he was based for a period of five years before his promotion to Furaha Primary—a place he completed his early education—to serve as its Deputy Headteacher.

In 2016, he was promoted and transferred to Wajir Secondary School where he was stationed until his nomination to the CECM position.

Wardere’s passion for youth and Education matters dates way back to his teaching era as the patron of Guidance and Counselling departments where has been very active and supportive for youth in schools through extra-curricular Activities.

He has also successfully overseen the facilitation and implementation of mentorship programs for youth in schools through awareness campaigns on various thematic areas. Wardere has previously served as Uwezo fund chairperson for Wajir East and the regional youth chairperson of the Kenya Red Cross Society where he remains an active volunteer and a Life member.

Wardere holds Bachelor of Education, Arts from Mount Kenya University and and Diploma in Teaching.

Farah Abdi Saman is a long-serving educationist with 20 years’ valuable experience serving in the education sector as a teacher and school administrator.

Before his nomination to the CECM position, Farah was the Director of Administration at Wajir County Government. He first joined Wajir County in 2015 when he was appointed as the Chief of Staff, a role he served until 2017.

Farah began his professional career in 1993 as a high school teacher at Takaba Boys Secondary until his promotion as a senior teacher and Head of Department at Moi Girls Secondary School, Mandera.

Boys Secondary school. He left the field of education in 2015 to serve in other areas within the public sector. Hon. Farah has received recognition during his teaching tenure where he was awarded as the best teacher at County and regional level on different occasions. Farah holds Bachelor of Education from Kenyatta University and Diploma in Education from Kisii College.

Saadia is one of the youngest CECM; holds over 10-year extensive experience on delivering resilience-related projects and community-led development programs in Kenya’s arid lands and Ethiopia. She has successfully overseen program management, implementation, and oversight while fostering partnerships with various stakeholders including government, communities, civil society, private sector and donor agencies.

Until her appointment to the position of CECM, she was Mercy Corps Kenya’s acting County Project Coordinator & Natural Resource Management Advisor, Wajir County. She has made stellar contributions to Wajir County during her service to Mercy Corps Kenya, with the development and implementation of Integrated County Geographic Information System (GIS) for Wajir County Government.

Studies from the University of Nairobi and is currently pursuing Master’s in public policy and Administration. In addition, Saadia has also completed Humanitarian Leadership Program in Amman, Jordan.

Before his nominations to the CECM position, Salah was a Commissioner with Privatization Commission of Kenya. He has considerable experience in the areas of Devolution, Governance and public Finance Management and served as the Senior Technical Advisor on ASAL to the Cabinet Secretary for Devolution and ASAL.

Previously, he served as the inaugural County Executive for Finance and Economic Planning in Wajir County from 2013 to 2017. Before joining the county in 2013, he was the Managing Director, Jubba Airways Limited as well as the Director of International Commercial Bank of Juba (South Sudan), Technical Advisor at World Health Organization-Ethiopia and Program Manager at Mercy Corps, Ethiopia amongst other notable postings.

Mohamud Abdirahman Abdi is among CECMs who have served in the Executive under Governor Ahmed Abdullahi during his previous term. Mohamud was the County Executive Committee member for different departments during that period.

He is an educationist by profession who spent his career teaching different schools in Wajir County after his graduation from Asumbi Teachers’ Training College where he attained his P1 Certificate.

He began his career at Wajir Primary School before he moved to Jogbaru School following his promotion as a Deputy Headteacher.

Mohamud was later posted to serve as an education officer under the District Education Office.

Mohamud holds a Diploma in Early Childhood Development and a Degree in the same from Kampala International University.