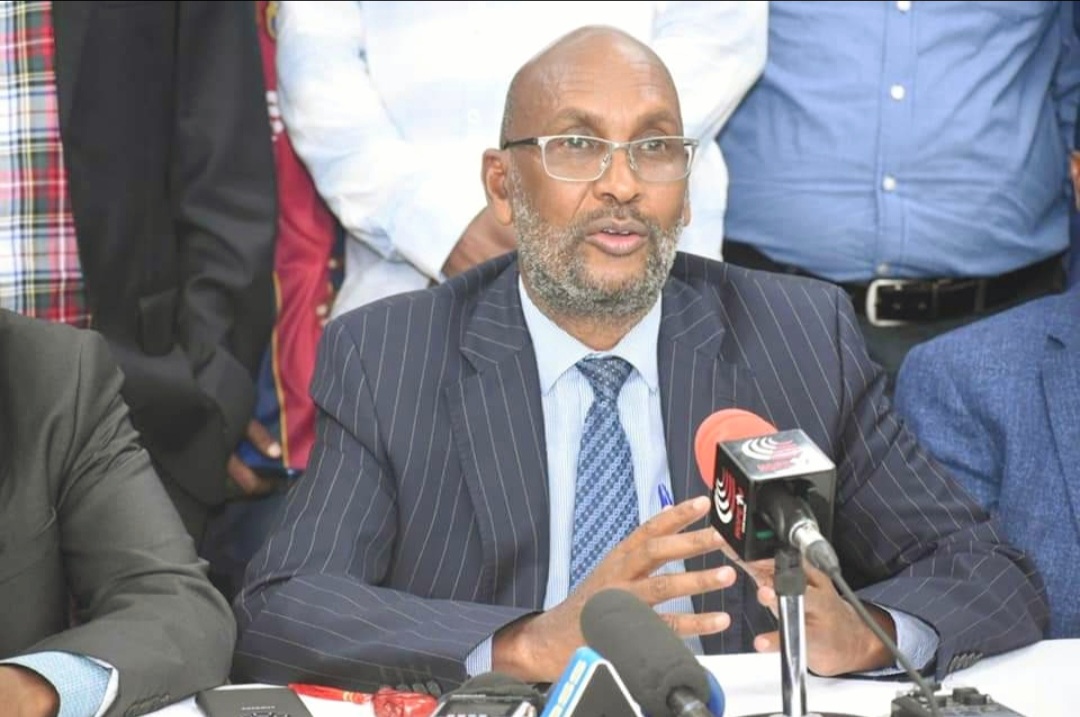 NAIROBI—Born 1958 in Wajir, Mohamed Ibrahim Elmi is a man of many: philanthropist, activist, politician and at times, all at once.

“Say, for instance, I was endorsed by my clan as their preferred gubernatorial candidate and I won the elections. Will I not be held hostage by the same elders at ransom?” Elmi asked during an interview with Kulan Post.

“This is a process that we tried and has failed. My mission is to be free from hostage situation. To achieve that, I have turned down all attempts to have me seek my clansmen endorsement. As you have seen since I launched my campaign, I am selling my agendas directly to the people,” he added.

Running on an independent ticket after he lost the Jubilee party ticket, Elmi’s political symbol is misbah—a bead consisting of three separated groups used for religious purposes—and picked “Tusbax and Towbah” roughly translated as “Beads and Repentance” as his campaign slogan.

“More than fixing the broken governance issue (in Wajir County) we need to repent to Allah for the mistakes we committed through nepotism, corruption and favourism at the cost of the poor and those who badly need proper service delivery,” Elmi proclaimed at a rally he held at Orahey grounds.

Elmi popularly known for his moniker Mohamed Fai, a tag he picked while studying at Garissa High School between 1974-1977, was introduced to Wajir in 1982 when he was posted to then Wajir District Hospital as a nursing officer, just shortly after graduating from The Medical Training Centre (now KMTC) in 1982.

It was at this period that Elmi came into contact with the late Italian lawyer and social activist Annalena Tonneli who would later unravel the worst human rights abuse in Kenya.

“There’s this period when Annalena left and the TB facility in Wajir was undergoing food rationing. As we all know, TB patients are not to starve. To remedy the situation, I teamed up with volunteers and went to the owners of [the] major wholesalers and shared the concern with them,” Elmi recounts.

“After intense lobby, we managed to get enough food ration to last for four months until Annalena returned,” he added.

He said salvaging the situation at the TB facility is “one of the proudest moment of my professional life.”

The Wagalla massacre, which occurred in early February 1984, started as an effort to disarm the ethnic Degodia clan following clan-related conflict in the region. What followed would later be recorded as a “systematic” targeting of a civilian population, making it one of Kenya’s worst cases of human rights abuses.

Eyewitnesses claim that thousands of people were delivered to the airstrip, kept hungry, ordered to strip naked and lie on the ground for days.

” I saw people, among them a cousin of mine, being forced onto military trucks. Being a person who lived much of his udult life outside Nothern Kenya, I found the incident shocking. Clad in my hospital coat, I confronted the soldiers to let the people go, but they drove away,” Elmi noted.

Few days later, word spread that his cousin was released, but the situation at Wagalla was getting terrible.

“I went to him. He looked starved, tired and injured. He narrated the gory situation at the airstrip. I immediately notified Annalena and hours later, we drove down to Wagalla to confront the soldiers,” he continued.

When the officer in charge of the operation saw Annalena, he shouted: “Who brought this white woman here?”

“I did,” Emi replied, albeit terrified.

While narrating his experience during a Truth, Justic and Reconciliation Commission (TJRC) hearing in Nairobi, Elmi broke down in tears while offering a glimpse of the situation at the airstrip before they were repulsed by military officers guarding the captives.

“What I saw and which has remained very distinctly in my mind until today, is a pile of bodies to my right, and two naked people carrying another dead body to put on the pile.

On the far left side of the field, I saw a young man running to the water bowser which had water leaking and flowing from it. Two soldiers were coming from different directions and beating him,” he said.

Elmi went scouting for the injured in the bushes and retrieved them for treatment. Many died because they ran away from the sound of cars as they thought they were being pursued.

He described an encounter with military in the bushes.

“As we were parked, with our vehicle doors open, two military lorries came after us. The soldiers first asked for directions. They were wearing masks. They told us to remove our vehicle from the road so they can pass. They went ahead, and as they passed, stench came out of the lorries. We later learned that they were the ones dropping the dead bodies.”

Six years later, he was appointed by the then District Development Committee to coordinate the initiation of nomad primary healthcare. It was during that period that Wajir saw two historic, significantly life-changing initiatives: “Hanuuniye” and “Daryeel” programs. Hanuuniye is a concept derived from Somalia where nomads had a roving classroom with an accompanying teacher, while Daryeel was an idea borrowed from Iran where a healthcare worker woud move around with the pastoralists in bid to cure and prevent life threatening diseases that affects humans and livestock.

A Unicef data before 1992 indicates that immunisation among children stood at paltry 5% while school enrolment was at 16%.

By the time Elmi left for Oxfam as District Project Coordinator in 1992, school enrolment was on upward trajectory while immunisation on children and livestock went up considerably.

“When I joined Oxfam, I realised people were not being engaged during project identification. Quickly, I changed the rule of engagement and introduced participatory development where we let the communities decide priority projects they want done in their areas,” Elmi recounts.

“At my stint at Oxfam in Wajir, I managed to support a platform for peace-building that ended a bloody conflict between two warring clans in Wajir that later culminated into The Al Fatah Declaration, introduced an early drought warning system and developed the initial concept that saw the creation of the Livestock Marketing Council,” Elmi narrated to Kulan Post.

A photo from 2001 when he graduated with Masters in Community Health from school of tropical Medicine, Liverpool University. (Courtesy)

In 2007, he came back to Wajir to vie for Wajir East parliamentary seat. He won the polls, jolting him into the murky waters of politics. At the national level, however, ODM’s Raila Odinga disputed the election results which declared Mwai Kibaki the winner. After weeks of deadly post-election violence, a grand coalition government was formed with Raila as Prime Minister. Mohamed Elmi was appointed the minister for Development of Nothern Kenya and other Arid Lands.

At the National Assembly, he tabled the Sessional Paper No. 08 of 2012 on National Policy for the Sustainable Development of Northern Kenya and other Arid Lands. The aim, he said, was to undo Sessional Paper No. 10 of 1965, which perpetuated the biased distribution of public investment established under colonial rule.

“Resources were directed towards the so-called ‘high potential’ areas of crop production, overlooking the wealth of lowland livestock-based economies and creating the deep inequalities in human development which we see in Kenya today,” stated Elmi, a recipient of the Member of the Order of the British Empire (MBE) award in 2002 confered by Queen Elizabeth in recognition for outstanding achievements or service to the community which have had a long-term significant impact.

He added that: “This paper addresses three distinct policy challenges which are particular to Northern Kenya and other arid lands: first, how to close the developmental gap between Northern Kenya and the rest of the country, which is a product of its historical experience, and in so doing strengthen national cohesion; second, how to protect and promote the mobility and institutional arrangements which are so essential to productive pastoralism; and third, how to ensure food and nutrition security across the arid and semi-arid lands, where unpredictability is certain to increase as the impact of climate change deepens.

“By addressing these three policy challenges, the Government will release the latent potential of the arid and semi-arid lands. In livestock, tourism, and renewable energy, and in its strategic location as Kenya’s bridgehead to the markets of North Africa and the Middle East, to the rest of the world.”

Shortly after, President Kibaki approved the Vision 2030 Annex for Nothern Kenya, drastically changing the State policies in Northern Kenya. Top on the menu was the proposal to invest in infrastructural development and ending drought emergencies.

The road between Garissa and Modogashe

In 2013 during the inception of devolution, Elmi who became the first MP for the newly found Tarbaj constituency, was a supporter of negotiated democracy then. He backed Ahmed Abdullahi for governor but later fell out with him.

In 2017, while still a believer of negotiated democracy, he endorsed Mohamed Abdi for governor.

In mid 2021, however, he publicly apologised for aiding Mohamed Abdi win the seat. He supported Abdi’s impeachment by the local assembly and later by the Senate.

“If we continue supporting leaders because they are from our clan, we are heading for doom. We must learn from history and history has shown us that mixing clannism and service delivery is a recipe for disaster” Elmi, who served as the CAS for Environmental and Natural Resources from 2018 until his resignation two months ago, said.