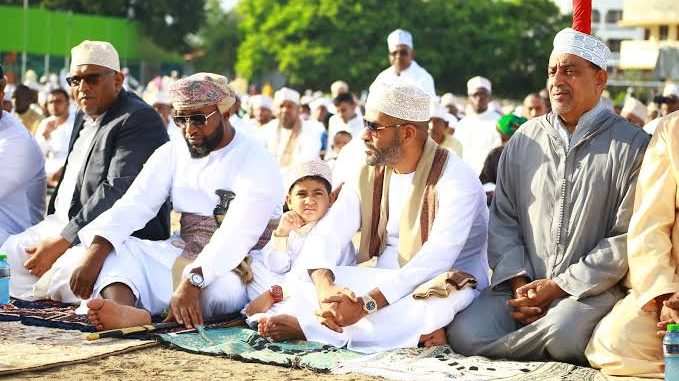 MOMBASA—Thousands of Muslims in Mombasa have offered special Eid-al-Fitr prayers marking the end of the fasting month of Ramadhan in open grounds, mosques and community halls.

Eid-al-Fitr (festival of breaking the fast) marks the culmination of Ramadhan, the ninth month in the Islamic calendar and is a month of fasting, prayers and spiritual purification.

During the month of Ramadhan, Muslims around the globe observe a strict fast between dawn and dusk and participate in pious activities such as Koran recitation, prayers and charitable giving and is a time of intense spiritual renewal.

In the Islamic tradition, there are two festivals observed by Muslims every year Eid-al-Fitr just after Ramadhan and Eid- al-Adha in the month of Hajj (pilgrimage to Mecca, Saudi Arabia).

Muslims celebrate eid by coming together with friends and family, wearing new clothes,giving charity and putting up decorations in their homes and usual greetings during this celebrations is Eid Mubarak (have a blessed Eid).

Wednesday has been declared a national holiday by the interior ministry to allow Muslims to enjoy their religious festival.

Religious leaders used the Eid occasion to urge the faithful to be peaceful, united and live harmoniously with other Kenyans of different religious affiliations.

Former Chief Kadhi Sheikh Hamad Kassim who led the prayers at the Ronald Ngala Primary School urged Muslims to be at the forefront in the search for peace and national cohesion.

Incumbent Chief Kadhi, Sheikh Ahmed Muhdhar who addressed the press after the prayers used the occasion to call on Kenyans to coexist in peace and unity for the country to make meaningful progress.

He urged the Muslim community in Kenya to live in harmony with people of other faiths and sustain the peace seen during the Islamic holy month of fasting.

Sheikh Muhdhar thanked the government for declaring the day a public holiday and asked the authorities to also grant Muslims another holiday in the year by also declaring declare Eid-al-Adha which comes two months after Ramadhan a national holiday.

The Council of Imams and Preachers of Kenya (CIPK) Organising Secretary, Sheikh Mohamed Khalifa asked the faithful to sustain the virtues of the period of fasting.

The cleric said Muslims need to rejoice in the spiritual success which they had attained at the end of the month long fasting.

He said Eid which Muslims around the world celebrate with prayer and feasting is a time faithful pledge their gratitude to God by engaging in charitable activities and philanthropic efforts.

On his part, Mombasa Governor, Hassan Joho said the beginning and end of the Islamic month is always determined by the sighting of the new crescent moon but decried that a section of Muslims on Tuesday ignored the local sighting and opted to break their fast with other Muslims across the globe.

The county boss called for unity, peace and religious tolerance to help build stability and progress in the country.

He said unity was necessary for development of the country and asked people to embrace peace and unity in the interest of national development.

Nassir said differences should not be allowed to impede the country’s development programmes saying there is need for unity of purpose.