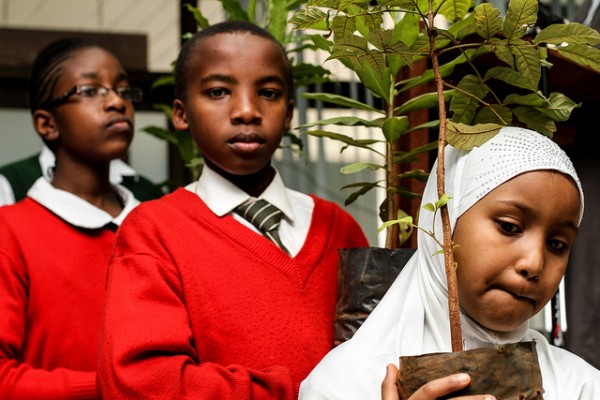 One of the oldest renowned Muslim schools in Kenya, is under siege at the hands of squatters muggers and vandals.

Muslim Primary School, Nairobi situated adjacent to General Waruinge Road, in Starehe sub – County has been invaded by squatters who are believed to be the cause of the rising insecurity in the area. “People come in with mattresses and spend their nights in our classrooms. They take advantage of the missing windows, doors and lack of a perimeter wall,” said Mr. Kariuki, the deputy head teacher in the school.
Lack of proper maintenance of the school has encouraged invasion by the squatters. The classrooms are dilapidated, abandoned and falling apart. The roofs are cracked and worn out. The wall paint has all peeled- off giving the school the look of a deserted and abandoned school.
“Muslim Primary School was one beautiful school with well manicured flower beds and 24 hour security throughout the year. A decade back, at any time, the school had more than 800 pupils. At the present time, it is a shame that we have only 70 pupils in the whole school,” laments the longest serving teacher in the school.
The drop in the number of pupils is linked to insecurity, poor maintenance among other administrative issues. The rising incidences of insecurity has forced many parents to transfer their children to more secure private owned schools. “In our neighborhood there are many mushrooming schools that are well maintained and have the security needed by parents. Most parents prefer private schools. They therefore transfer their children to these schools,” says another senior teacher in the school.
Cases of thieves and muggers pouncing on parents, teachers, and pupils are on the rise. Almost on a daily basis, several cases of mugging and robberies are reported on a daily place in the area. The school’s deputy head teacher confirmed that teachers have been robbed of their valuables and one of them was gravely injured. The teacher later sought for transfer to another better school. “We are sometimes threatened by robbers in our working station before our very own pupils,” she says.
The school has faced acts of vandalism on several occasions with the staff room, kitchen, store, head teacher’s office been affected. Window grills, window panes, kitchen utensils, notice boards have been carted off by vandals.
Teachers no longer use the common school entrance because of the fear of being mugged. They have to circumvent a longer route through their school field,” says Mrs Mugo, a concerned parent, who resides near the school. She says while cases of criminal activity have been reported to the police, no action has so far been taken.
In the neighbouring Pumwani Primary School and Pumwani Girls Secondary, teachers are also using a different entrance from the common one to escape from muggers and thieves.“Part of our school has been invaded by muggers and chokoraas,” says Mr. Omondi, the Pumwani Primary School head teacher while admitting the challenges facing the school.
The school’s academic standards have also been affected by the constant shifts in the school population. Some of the pupils are Somali refugees and the dynamic challenges facing them such as the police swoops on illegal immigrants have also impacted on the enrolment rate and academic standards. “Sometimes we find some of the pupils missing school only to hear that they have re-located to the United States, Canada, Britain or to the local refugee camps in Kakuma and Daadab, ”says another teacher.” Due to this, the school finds itself constantly enrolling new students all the time and it is difficult to record good results when you receive raw students each term,” says the teacher.
Lack of Islamic Religious Education (I.R.E) teachers remains one of the main challenges facing the school. Being a school founded for the Muslim community, parents come with the hope that their children will access Islamic education but at present it does not have enough I.R.E teachers and this has discouraged Muslim parents to send their children to the school forcing disgruntled parents to transfer their children to other schools.
Most of the children come from poor income backgrounds and face challenges of meeting basic education requirements like exercise books, proper school uniform. In partnership with the Feed The Child Fund, the school provides a free feeding programme to ensure that learners attend school on daily basis. The programme’s future is however, in jeopardy as after the Sh100 contribution from the parents is hardly fulfilled by majority of the parents.
There are three other long serving primary schools next to Muslim Primary School. They are together known as the BAMP schools which are derived from the acronym of the names of the schools: St. Brigids Primary School (B), Dr. Aggrey Primary School (A), Muslim Primary School (M) and Pumwani Primary School (P).
The BAMP schools were established to educate children belonging to specific religious convictions. St. Brigids was established to educate Catholics, Dr. Aggrey was meant for Protestants. Pumwani Primary was for the native African child while Muslim Primary School was started with providing education to Muslim children.
“All of the B.A.M.P schools have a potential for a brighter future, however, they are in a state of despair. The BAMP schools in general are not in proper state and with renovations of the classrooms, washrooms and other amenities, they can attract many pupils,” says Mr. Wachira, Dr. Aggrey Primary School’s head teacher.
Surprisingly, Muslim Primary School has produced some great minds. The best example is the current chairman of the Independent Electoral and Boundary Commission (IEBC) Ahmed Issack Hassan. Muhammad Hassan, a successful renowned physician in the US is also a product of the school.
Email: christophernyagarama@yahoo.com