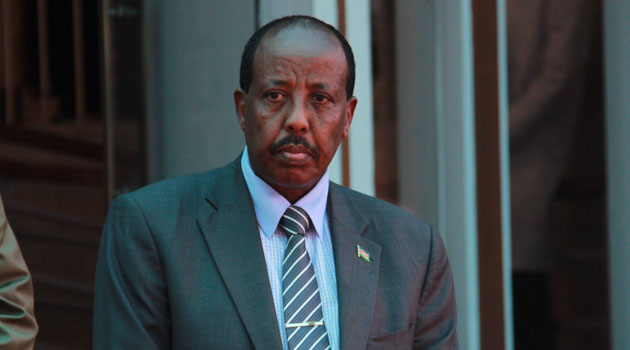 MANDERA—The government is considering to reintroduce curfew in Mandera County a month after it was lifted due to the Muslim holy month of Ramadan. The Muslim Community and its leaders asked the president to lift the dusk to dawn curfew in order to observe night prayers.
Speaking at Mandera as the 11 bodies of the Tuesday Mandera attack were loaded onto a military aircraft headed for Nairobi, the regional security coordinator Mohamed Salah hinted that the curfew could be reintroduced to avert similar attacks in future.
He added that preliminary investigation indicate that the attackers were radicalised local youths.
“We believe the attackers are still in Mandera and the police are will get them,” he assured.
Mr. Salah was accompanied by senior security officers from the region among them Omar Shurie, the former Administration Police training commandant.
Salah called on the locals to volunteer information on suspected criminals in their midst as the government steps up its war on terror.

However, Mandera County Senator Billow Kerrow said there was prior intelligence volunteered by the landlord of the houses that was attacked by the militants.
“I guess I am a bit naive to imagine that government would ever admit its failures in preventing an attack. It’s always a spin to look good”, he said.
Kerrow urged the government to stick to recommendation submitted by leaders from the region after the deadly Garissa attack that left at least 148 people dead.