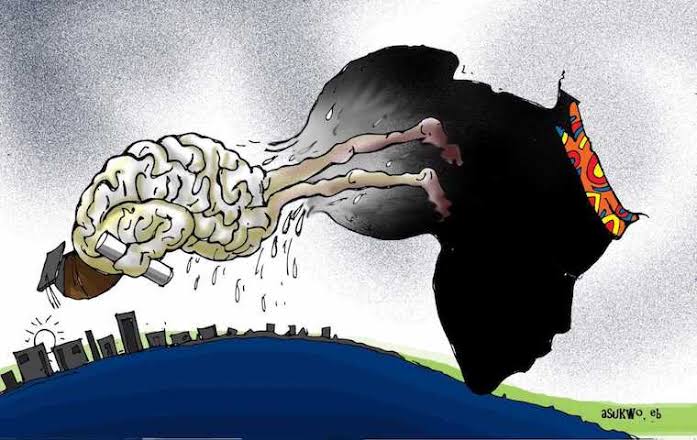 Africa is suffering from a significant “Brain Drain”. What can be done to stem this flow?

Hundreds of African migrants are leaving the continent legally or illegally everyday for Europe, America or the Middle East. Doctors, engineers, professors and other skilled professionals are leaving Africa because of war, political instability, low income, and high cost of living, attraction of higher pay, better opportunities, as well as a lack of better quality of life and labour market. This is draining the continent off its best talents.

Migration can lead to a ‘brain drain’ and loss of knowledge in our countries. However it can also lead to advancement of expertise, as migrants return to their home countries if they are encouraged to return.
Political stability and advancements of democracy is vital in reducing the number of African professionals leaving the continent. Politics influences policies and governance structure which directly affects the quality of labour markets. Lecturers in Kenya have been on strike more than five times over the last one year.

This has stalled learning and research work for over 600,000 students in the 31 public universities. The lecturers are demanding a pay rise. This might lead to many of the professors leaving the continent in search for better opportunities in Europe and America. If there is no political goodwill the brain drain might escalate.

African governments should provide resources to its citizens. Investing in public works and infrastructure will cut short the number of African professionals leaving the continent. African governments can successfully realize these by curbing corruption and using the recovered money in development.
However Investing in infrastructure won’t be enough to reduce the brain drain. As long as there are scarcity of opportunities for African professionals, more and more will definitely leave the continent, leading us to spend an estimated $4 bn annually to employ about 100,000 non-African expatriates.
Issues like poverty, insecurity and human rights violations must be dealt with to realize an Africa free of foreign expertise.

Another key strategy which the UN is championing for and wants it adopted is the international agreements by industrial and developing nations, under which wealthy countries pledge not to recruit skilled people from developing countries. This strategy will definitely reduce the brain drain and increase the chances of Africa solving its own problems.
African countries must provide gainful employment, professional development and educational opportunities to qualified nationals.

The AU has come with draft report, The Revised Migration Policy Framework for Africa and Plan of Action (2018-2027), which will be adopted by member states as measure to the curb the increasing drain in Africa.
The brain drain in Africa can be addressed by promoting the return of migrants or involving them in their country’s development even while they are abroad. This way they will feel part and parcel of the community hence bringing back home professionals and experts.

This will in the long run reduce the number of Africans leaving the continent and influencing other professionals to stay in Africa.
Another mechanism which I believe can significantly reduce the number of Africa’s talent going abroad, is to create centers of excellence with the necessary infrastructure that can effectively prepare for the reception of African scientists and professionals from the diaspora who can contribute within a framework that offers good working conditions and the expansion of training capabilities in Africa for its top professionals.
Other initiatives can be used to increase the capacity Africans within the continent as a measure to curb this problem.

In Zimbabwe for Example, universities are allowing engineering students to study for free while In Ghana, the Public Sector Management Training Programme has trained 375 students in the last decade.
Key to countering the brain drain in Africa is to uplift the living standards of its taxpayers. My thinking is, African countries should invest a third of their budget in programs that will directly change the living standards of Africans. These programs should change the quality of lives of Africans.

Universities should award grants to scholars and students with brilliant ideas which can be adopted when formulating policies that will uplift the living standards of Africans. These will motivate people living in the continent to remain and encourage the diaspora community to come back and invest in their home countries.

Governments should discourage and come with mechanisms to curb corruption and nepotism.

People should only be promoted based on merit. I have at an individual level interacted with professionals who were willing to migrate to other continents in search of better opportunities because the seniors at their places of work promoted other people based on their religious affiliation and ethnicity.

Providing adequate research facilities at institutions of higher learning and universities is a significant factor which can be used to reduce the number of African professionals and talents leaving the continent.

The continent is already receiving funding from the European Union, which provides more funding to the continent than it gives to Asia and Latin America combined and there is additional support from Australian, North American and UK research agencies.

However various data reveal the disappointing reality that Africa’s contributions to the world’s research and development (R&D) remain very low, totaling to less than 1 per cent of global investment in research.

Our governments should encourage research work.

African countries can pass legislations to reduce the exodus of about 20,000 professionals a year since 1990. South Africa has already passed legislation, according to Home Affairs, the legislation would allow the government to track and limit South African citizens planning to leave the country for more than three months.

This legislation will also delineate how Government will deal with the influx of immigrants streaming into South Africa from other African countries.
We should practice intellectual freedom to halt the brain drain menace affecting African countries. Professionals are leaving the continent because their ability to think freely is questioned.
African countries should adopt new technologies offered by the 4th industrial revolution to catch up with the rest of the world.

Advanced technologies used in agriculture will not only create opportunities for our citizens but encourage experts to come back home and invest at a time when racism against black peoples it at the peak.I

t’s time for the AU and other regional bodies to invest in new technologies to boost Africa’s economic growth.

Recognizing and rewarding excellence in professional careers will stem the flow. Africa will not survive the brain drain as long as a doctor or an engineer gets less respect than the so called educated political leaders.

Africa is on the rise and I believe that in the next decade, the continent that was once perceived as a hopeless region will rise.

Yunis Dekow is a Kenyan Journalist and a Communication strategist based in Nairobi.