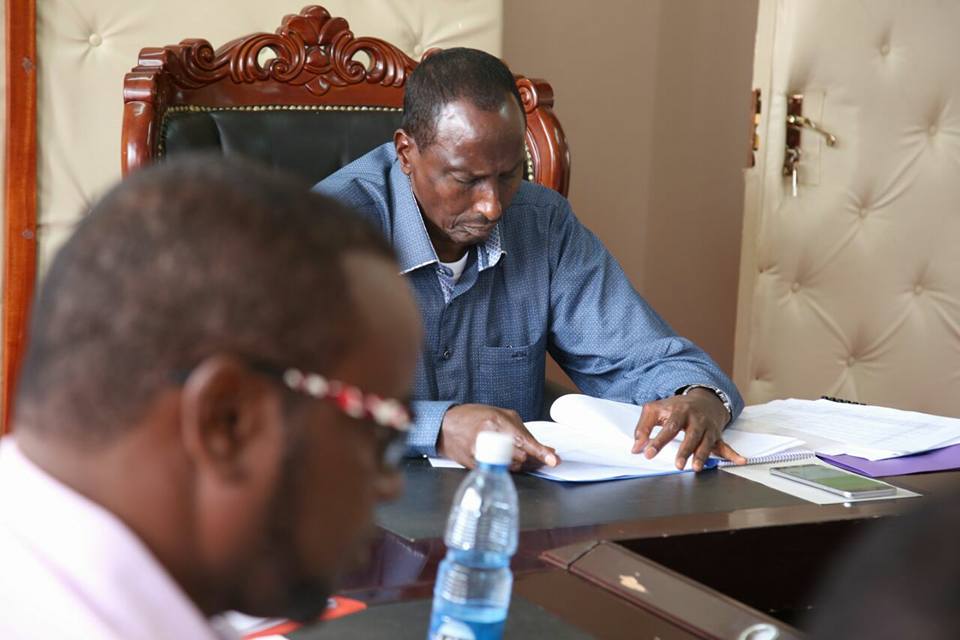 WAJIR—Its 8:30 in the morning. At Soko Mjinga in central Wajir, such time is a busy one.  At the junction, several women are engaged in heated chatters that give way to murmurs.

Like everyone in Wajir in this week, the grapevine is about the awaited verdict at Milimani High Courts in Nairobi where the election victory of the county governor, Mohamed Abdi is contested by former governor, Ahmed Abdullahi and Ahmed Muhumed.

The talk here is mainly about the verdict in the event the judge annuls the victory of the governor.

“Caato (Ahmed Muhumed) and Jiir (Ahmed Abdullahi) will have to form a coalition to win the by-election,” Yunis Abdirahman, a teacher at one of the primary schools said.

Ahmed Muhumed Alias Caato and former governor Ahmed Abdullahi while presenting the petition in late September. Their petition will be ruled on tomorrow at Milimani High Court

He added that the ground will not favour “simultaneous campaigning given the authority Mohamed Abdi enjoys as the sitting governor.”

Ahmed Abdullahi commands massive support in Wajir West, a constituency that has over 28,000 voters while his counterpart, Ahmed Muhumed enjoys unwavering support in Wajir South and parts of Wajir North.

Elders and opinion leaders from both camps are rooting for a possible coalition where Ahmed Abdullahi will be crowned as the governor to serve his last term and to be deputized by a candidate from Wajir South.

Ahmed Muhumed will bless the coalition support the campaign.

The other option on the table is to crown Ahmed Muhumed as governor with a running mate from Wajir West.

“Ahmed Jiirow can decide to give up and say ” tosha” to Ahmed Caato, because to him he just want to prove a point,” Mursal Abdullahi, a shopkeeper at Stage Griftu says.

By Thursday afternoon, tens of supporters are expected to travel to Nairobi to witness the first court verdict on Wajir gubernatorial election.

“We have prepared ourselves for the verdict and plans have been finalized on how to celebrate the outcome,” the county press director tells Kulan Post, adding that, “It will be a ticket to let us continue the work we started in August.”

On Friday, the verdict will be announced at the Milimani High Court.