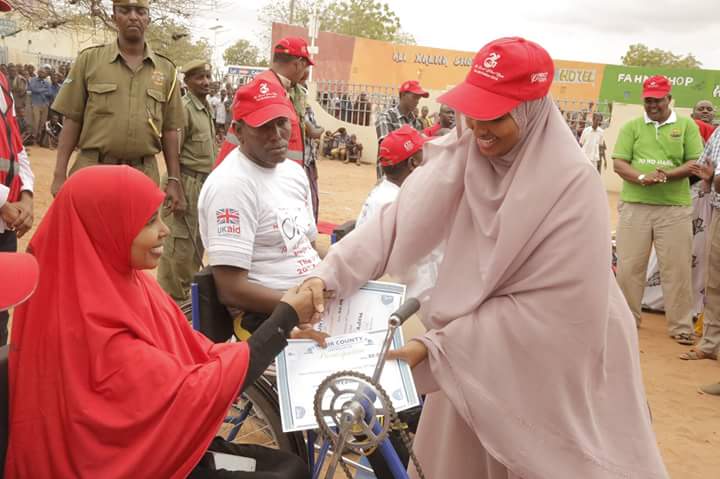 NAIROBI—The fifth edition of the Desert Wheel Race is set to take place in Isiolo next month. The race is aimed at creating awareness on the plight of the people living with disability and influence an inclusive society devoid of discrimination and with respect for human rights..

The race this year is set to attract political leaders among them the Majority Leader of the National Assembly, Aden Barre Duale.

The annual event draws hundreds of participants and attendees to the scenic plains of Isiolo County and features one-and-half kilometers of wheelchair race and five kilometer of tricycle competition.

In the past, the event attracted 35 participants from all the seven counties in Northern Kenya in a bid to advocate for access to education for children with disabilities from the region. Ten more counties expected to take part this year.

The Desert Wheel Race is the biggest sporting event in the country for the disabled.

Each of the participating counties held a local competition ahead of the 3rd September race in Isiolo County.

The governor of Wajir, Ahmed Abdullahi presents a certificate of participation to one of the participants of this year’s Desert Wheel Race. PHOTO: Courtesy.

Disbility rights activist, Harun M. Hassan said this year’s aim is to foster peace and unity and how the people living with disability could be part of achieving it.

“The theme of the Race (this year) is ‘Racing for Peace and Unity’. It’s about how to involve disabled persons in peace building processes and national cohesion,” he said.

He added that perennial conflicts and clan clashes add to the soaring number of disables in the country.

“During times of conflicts like clan clashes, banditry attacks and other atrocities not only increases cases of disability, but those already with disabilities are disproportionately affected,” he notes.

According to the census statistics of 2009, 3.5 percent of the total population, people with disabilities in Kenya is about 1.3 million.

World Health Organization recommended that Kenyan population of about 36 million show there could be some 3 million disabled people who need assitance and empowerement . WHO also called on the government to double funding on programmes to support Kenyans with diabilities.