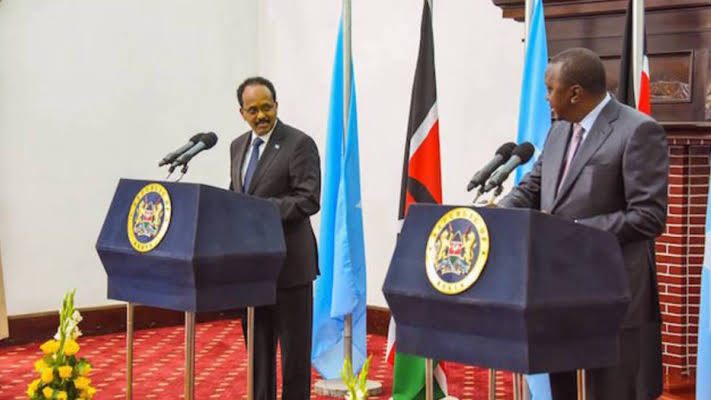 NAIROBI—The president of Somalia, Mohamed Abdullahi “Farmajo” has agreed to meet with his Kenyan counterpart following days of diplomatic row over presence of Jubbaland minister in Mandera town.

According to statement by Villa Somalia Farmajo’s planned visit to Nairobi comes after President Uhuru dispatched his right-hand man and the Cabinet Secretary for Interior, Fred Matiangi to Mogadishu on Sunday. Matiang’i presented an invitation from President Uhuru.

Experts on Somalia-Kenya believe Uhuru’s choice of Matiang’i as emissary was best bet given his “no baggage” status.

Kenya and Somalia slipped into bitter diplomatic row since the issue of the maritime border dispute came up under the leadership of President Mohamed Farmajo. The row was nearly ironed out in November when President Uhuru drove down to the hotel President Farmajo was staying in Nairobi at the sidelines of the ICPD25 summit.

Somalia sued Kenya at the ICJ, demanding to redraw the current sea boundary so that it runs diagonal, extending from the land border, as opposed to eastwards south of Kiunga along Kenya’s coastal region.

The meeting came hot on the heels of the September meeting at the sidelines of the 74th session of the United Nations General Assembly in New York, US, which was mediated by the African Union chairman and Egyptian President Abdel Fattah el-Sisi. However, the impasse still persist.

On the latest row, Somalia want Kenya to hand over Abdirashid Janan, a former Jubbaland minister Mogadishu considers a fugitive following his jail-break from a remand facility in the Somali capital. Nairobi maintains no formal request was made for the handover.