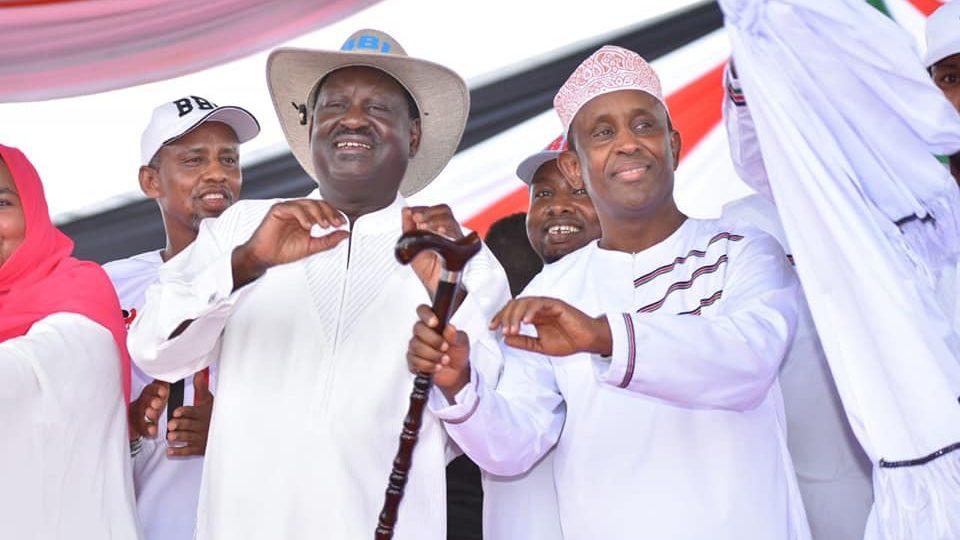 GARISSA—The education crisis in the Northeastern counties was discussed during a meeting with President Uhuru Kenyatta, Raila Odinga said.

Speaking at Garissa Primary grounds during the Building Bridges Initiative (BBI) former premier and opposition leader said the president vowed to end the crisis. He, however, did not specify the content of their discussion.

“I raised the issue of teacher transfer and the general education crisis with the president. He said a solution would be reached very soon,” Raila said.

The comment by Raila comes a week after the Majority Leader and Garissa Township Aden Duale said he would not attend the BBI rally until when the crisis is solved.

Referring to the recent mass transfers of non-local teachers by the Teachers Service Commission from the counties of Mandera, Wajir and Garissa, the Garissa Town MP wondered why the commission would rush into making such a decision without consulting.

“Let me make it very clear. For us to discuss BBI the following must be done: We must candidly discuss why schools are closing in northeastern and our children are being denied the right to quality education. We also must discuss the serious insecurity bedeviling our region. Finally we must discuss the doctored census figures,” said Duale

The leaders who attended the rally said the teachers crisis, which started off after non-local teachers were targeted by the Somalia based militant group Al Shabab, will be solved without boycotting the report.

”…I reiterated my earlier call that teachers’ crisis in the region should not be a subject of discussion but a matter that should be addressed with the urgency it deserves,” Wajir Governor Mohamed Abdi said.

On his part, Eldas legislator Aden Keynan said the BBI rally allowed them to air their grievances.

“We used the platform to express our disappointment with the government especially the Teachers Service Commission’s response to the security challenge in the region,” he said.