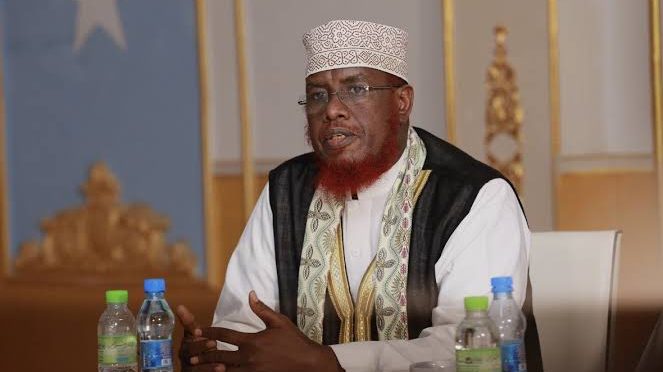 NAIROBI—If there’s one thing this year’s Eid confirmed, it’s that the Nairobi based top cleric, Sheikh Mohamed Abdi Umal has overtaken Jamia mosque and the Chief Khadi as an authority when Muslims in Kenya seek direction during uncertainties.

Despite the religious authorities in Saudi stating that the Eid would be on Sunday, majority of Kenyan Muslims celebrated the holiday on Saturday. Some of the Muslims prepared to fast on Saturday, but were awoken by announcement blaring from the mosques.

The tone and direction was set by none other Sheikh Umal who made the announcement through live feed on his Facebook pages.

“After confirmation from several places in Jubbaland and Rhamu, I would like to make it clear that the crescent moon of Shawal has been sighted, marking the end of the holy of months of Ramadan,” Umal declared to over seven thousand Muslims who were watching live.

Despite making the announcement at midnight, the news spread like a bushfire on summer. Even a letter from the office of the Chief Khadi released earlier did not receive such a prominence as the video of Sheikh Umal.

A lot of people are wondering how a cleric who barely speak English or Kiswahili , the two official languages, enjoys such a following beyond the Somali community.

“It has everything to do with the authority he speaks with and the large following he has among the Somali community who make up roughly over 60 percent of Kenyan Muslims,” opined Hassan Shiekh Mohamud, a former student of Sheikh Umal and now a businessman.

“How else do you explain that a sheikh whose only medium of communication is Somali has such a large following even among the non-Somalis?” He enquirered.

Immediately Sheikh Umal made the announcement on the sighting of the crescent moon of Shawal, his video was shared widely on Twitter with either Swahili or English captions.

Sheikh Umal has been the Imam of Abubakar Mosque in Eastleigh’s 6th Street for close to two decade. Umal, a figure seen as controversial by large section, shot to prominence in the late 90’s when he started recording his lectures on videos cassettes for wide consumption. He is considered among the leading Islamic televangelist and preacher of the Somali community.

Just last September, he was denied to hold a public lecture in Mogadishu after he was accused by the Sufi sect of “spewing hatred against the prophet Muhammad,” an accusation he denied.

In Kenya, there’s a void in leadership among the Muslim community who make more than 10% of the population.

“… mandate of the Chief Kadhi cannot spill over the confines of administering personal law amongst Muslims which includes disputes related to marriage, divorce, and inheritance,” Duale said.

As section of Muslims mark the Eid-ul-Fitr today during a period of uncertainty, Sheikh Umal emerged as an authority although his position is subject to debate.