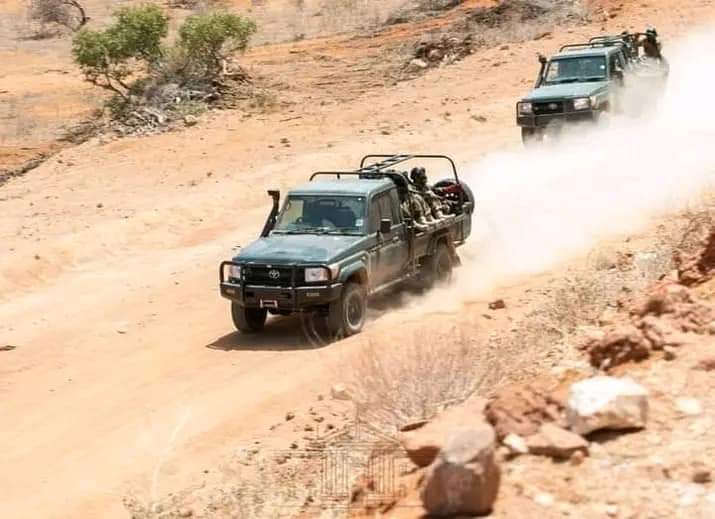 By: Dr Warsame A Ahmed

Bualle in Middle Jubba is the capital city of Jubbaland administration. It’s fully controlled by Al Shabab: they collect taxes, almes and carry out extortions. The militant commanders, trainers, doctors, explosive experts operate from Middle Jubba, a walking distance from the Somali-Kenya border.

Amid the pressure from other parts of Somalia, Al Shabaab is on the run now and Middle Jubba is their safe heaven. The big question then is whether Kenya should watch this dangerous events unfold while just protecting the interest of few and some landmarks.

Earlier this week, Al Shabab reportedly intercepted an ambulance in Mandera County with four occupants including a patient. The four occupants have since been released but the ambulance is still missing. This is a daily reality along the porous border between Kenya and Somalia. The County Commissioner of Mandera told Kulan Post that “elders and good cooperation agreement between Gedo and Mandera County” saved the day.

What was the reason for the sacrifice Kenya has been making for the past 11 years in Jubbaland? Was it to protect their Somali neighbours and Kenya’s border from Al Shabab or just to be in Kismayo protecting political interests of a few? If it is the latter, Kenya has done a great job! If the purpose was to fight Shabaab, that hasn’t materialised because if the group can launch an attack in Kenya in broad daylight and drive a vehicle all the way, then a change of tack is required.

Defending Kismayo port and the airport and few other landmarks is not fighting Shabaab. To protect Kenyans in Kenya and Somalis in Jubbaland, Kenya must be on the attack and must liberate Shabaab’s strong hold— Middle Jubba.

One thing for the Kenyan government to keep in mind is that the Middle Jubba is the breading ground and the launching pad of Shabaab and as has been the case for over 10 years now. There are no schools, hospitals, freedom and definitely no life in Middle Jubba and most of Jubbaland. What ideology will young people who grew up under Shabaab leadership hold? Remember those with Shabaab ideology are your neighbours and if you don’t get rid of them, we are at risk.

Kenyan troops liberated parts of Jubbaland in 2011 under the operation “Linda Nchi” and Kenyan forces lost a lot of its gallant officers ever since—a huge sacrifice. This operation was aimed at making Kenya safer, but ove ten years later are we safer?

Here are some atrocities committed by Shabaab:

In October 2011, two Spanish doctors and two others were kidnapped from Dhadhab refugee camp by Shabaab. On 21 September 2013, Shabaab attacked the Westgate Shopping Mall in Nairobi, killing many and injured dozen others.

In April 2015, Shabab launched attack in Garrisa University killing 148 people, 142 of them helpless students. June 15, 2016 Shabaab launched a daring attack on KDF in El-Adde and Kulbiyow where close to 200 KDF soldiers lost their lives.

In January 2021, there were two attacks within 24 hour; one killing 17 KDF solders and the second one killing 7 more.

In addition, 9 KDF tropps were killed in March 2022 in Gherille, Gedo. At the same time there was an attack on KDF, claiming 17 soldiers between Dhobley and Taabto.

In Somalia, there is a new community-led initiative called “Macawisley.” It’s a vigilante-type who get assistance from the State to fight Shabaab.

Macawisley liberated Hirshabeele and Galmudug regions and they are now targeting to liberate Shabaab from the rest of Northwest regions of Somala. As the pressure mounts, Al Shabaab is gathering and most likely regrouping in Jubbaland where they have enjoy relative amnesty.

No one has attacked them for over ten years, but they operate freely in Jubbaland. This coexistence between the local administration and the militant group is not in the best interest of Kenya or Somalia. Kenya should join the fight against Shabaab, the local communities are eager to work with them as Macasiley and flight Shabaab alongside KDF.

Liberating Middle Jubba from Shabaab is the only was to protect Kenyans from the unfolding danger from Shabaab. It is now or never—Kenya should act now.

Macawisley alone will not liberate Middle Jubba and the rest of Jubbaland from Shabaab. Government of Kenya should seek assistance from local communities rather than Jubbaland Administration. For over ten years the Administration hast taken a step to fight Shabab. On Few occasions, solders were airlifted from Kismaayo to Afmadow in the name of liberating Middle Jubba but that was aimed at derailing efforts from the federal government to liberate Middle Jubba. Apparently Jubbaland Administration has been misguiding Kenya on Shabaab for the past ten plus years now, Kenya should abandon this partnership as it is not making Kenya safer rather it is making Kenya more vulnerable.

Northeastern counties will not be the only region that will bear the brunt, but the rest of Kenya isn’t immune from the looming danger of Shabab as their enhance neighbour.

Kenya should rather honourably leave Jubbaland and enforce its borders or attack Shabaab where it hurts them most. The interest of Kenya should be to keep Shabaab at bay and to keep Kenyans safe.

Speaking with Al Jazeera last month on Somalia, President Ruto’s remarks opened a window into his attitude in his first days in office: “We can do what neighbours do: we can always engage and find solutions to the challenges that face.”

Let the results show why we made the invaluable sacrifices , the original intent of crossing the troops into Somalia and the resources incured 11 years after the Linda Nchi operation begun.

~The author is a Peace and Security analyst based in Nairobi. He can be reached on Warsameahmed@yahoo.com