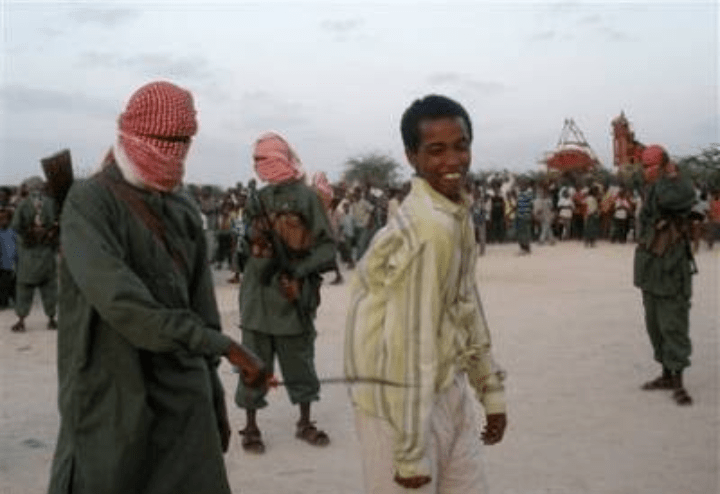 The 16 years old Hassan was flogged in public, (Courtesy)

SOMALIA—Somalia’s militant group Al-Shabab has flogged a teenager after their court said he was found guilty of sexually molesting a young girl in the southern town of Barire.

The flogging took place at a public square in the village and was witnessed by a large crowd on Monday.
A local Al-Shabab judge who read the court’s judgement at the square said Hassan Hussein, 16, was found guilty of raping Madina Fidow, who is 12 years old.

Al Shabaab have been fighting Somalia’s government since at least 2006 in their campaign to establish an Islamic state. Somali government forces, backed by African Union soldiers, have made gains against Al-Shabaab since forcing the Islamist fighters to withdraw from the capital, Mogadishu, three years ago.

The teenager received 100 lashes and ordered to pay a dowry and expelled from the town for a period of one year. Al-Shabab media the family of the rape victim welcomed the verdict.

Al Shabaab has carried out executions, floggings and single-limb amputations after summary trials in many of the areas it controls. Charges include theft, espionage, rape and adultery. Women and children have also been executed.

Last year, dozens of people were either executed or flogged by the group.

The group has been pushed out of most of Somalia’s main towns by AU peacekeepers and clan militias, but it still holds swathes of the countryside in south-central Somalia. It also frequently launches deadly bombings in the capital, Mogadishu.