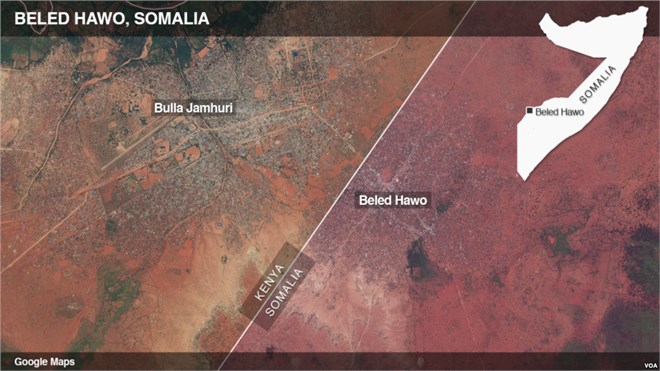 A sketch of the proposed wall separating Kenya and Somalia. (Google Map)

MANDERA—-Residents along Kenya’s border town with Somalia have taken to the streets on Saturday to protest against the wall separating Somalia and Kenya.

The Beled Hawa residents said the construction, apart from isolating families, was an ”act of aggression.”

“This (construction) is getting deeper into our (Somalia) territory without express permission from the government,” Mohamed Siyat, an elder, said.

He was part of hundred protesters which engaged the security officer manning the construction of the wall.

The wall was part of a wider measure to tame the then runaway terror attacks in the country in early 2015.

We are happy with the progress of the security sensitisation programme as visible work has been done unlike in the last two months when we visited the site,” he said.

He said the fencing is not intended to lock anybody out of Mandera but it is about security by restricting human access only through identified entry and exit points.

“We want our brothers from Somalia to do business with us through the customs border and we can … keep unwanted elements of society out,” said Mr Roba.

Officials from the federal Somali government have not reacted to the Saturday protest.