Somalia is like a pig, you clean it, it gets dirty, AMISOM colonel says 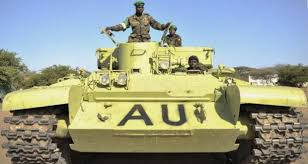 In its resolution, the Security Council recalled that it authorised the African Union to reduce AMISOM to roughly 20 600 personnel by October 30, after 1 000 troops were pulled out last year.

However, many Somalis were angered after an AMISOM official compared Somalia with a pig.

“Somalia is like cleaning a pig, you clean it, and it gets dirty,” a Ugandan army told the Foreign Policy.

He compared Somalia to Afghanistan. If the coalition in Afghanistan left, he argued, the Taliban would easily take the country back. The same was true for Somalia.

In a tweet, AMISOM denied this saying those views do not associate with them.

“The attention of AMISOM has been drawn to an article published by the Foreign Policy Magazine on Aug 7 on the security situation in Somalia. The commentary and statements made by the people quoted in the story do not in any way reflect the views and position of AMISOM,” the tweet read.

The mission was deployed in 2007 to defend the internationally-backed government against attacks by the Shabaab, a Somali-led Al-Qaeda affiliate.

Al Shabaab was blamed for the country’s worst ever attack, in which a truck bombing left more than 500 dead in October last year.

The UN resolution came following an attack by Al Shabaab militants on a hotel in Mogadishu, Somalia on Sunday. More than 10 people died, including one member of security staff from the Chinese Embassy.

Why Abdi Omar Iley of Ethiopia is a cruel dictator