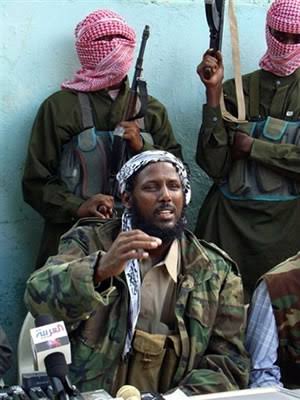 Mukhar Robow addressing the press in past Shabab conference. (Courtesy)

The arrest was followed by backlash from locals who accused President Farmajo led government of meddling in local elections.

In October, the federal government attempted to bar Mukhtar Robow from contesting to no avail after he was cleared by the electoael commission.

On Thursday following his arrest, violent protests rocked the city of Baidoa, killing 11—soliders and civilians.

The locals said the arrest undermines their right to choose candidate of their choice, adding that President Farmajo is using external forces to get an upper hand in local matters.

“This is a violation of democracy, Robow was standing in his region and his people wanted him. The government has no right to arrest him,” Baidoa resident Mohamed Sheik Ali told AFP news agency.

However, the arrest and the preceeding bid for the regional presidency following the resignation of  President Hasan Sharif early last month, has beamed the spotlight on the discretion of reformed militants in a country like Somalia where the horrors of massacre by Al Shabab militants remain fresh in the minds of victims and their families.

Just weeks before Mukhar Robow declared his candidature, Somalia marked the first anniversary of the worst insurgent attack in the country when a truck stuffed with explosives went off at Zoobe roundbout in central Mugadishu. Over 500 people died in that blast later claimed by Al Shabab.

Robow was once the spokesman and deputy leader of the militant group.

The truck the local authorities believe was used to set off the deadly blast on October last year. (courtesy)

“Ethiopians as peacekeepers in Somalia are welcome. Their direct intervention in sensitive local political matters at a time of an election is not,” he said.

Farah Maalim who once served as eputy speaker of the Kenya’s national assembly between 2007-2013 said arguments that the previous Somali President, Sheikh Shariff Sheikh was leader of the Islamic Courts Union was weak oneo with no basis in law and common sense.

“(President) Sharif led the most peaceful administration in the history of Somalia”. Farah said while speaking at a Nairobi hotel where he attended a donation drive to help  Somali  refugees with academic books.

Tomi Oladipo, a correspondent with the BBC on African security told the broadcaster that, “Mukhtar Robow’s defection last year from Al-Shabab was much-touted by Somalia’s UN backed-government as a success in its fight against the militants. But his standing with the government collapsed when he announced his candidacy to become President of South West state.”

A statement by the federal government said Robow was a “security threat.”

The alleged arrest of Robow by the Ethiopian forces with the backing of Villa Somalia; the highly fortified presidential palace in Mogadishu sparks a conversation mostly avoided by President Farmajo who remain accused of extradition of Abdikarim Musa Qalbidagah, a former general in the Ethiopia based ONLF.

Victims want justice for their loved ones killed by Al Shabab at a time when clan support for Robow remains charged.

Analyst are saying that President Farmajo goverment is opposed to the regional presidency of Robow for fear that he would use his position of authority to fan and fuel conflict in the region.