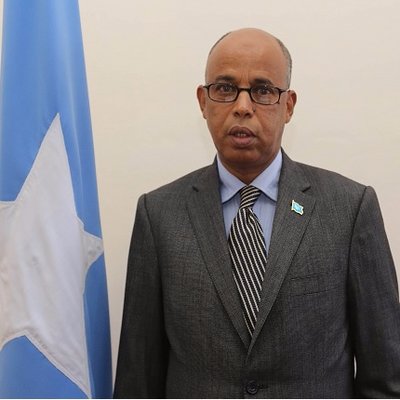 Deputy minister of foreign affairs and international cooperation, Mukhtar Mahad Da’ud. He has been suspended on Thursday over fraud allegation.(Courtesy)

According to a statement from the office of the PM, Mukhtar Mahad Da’ud was let off after the Attorney General; Ahmed Ali Dahir accused him of corruption and stealing of public funds.

The Attorney says there was 4-month long investigation into alleged fraud where he blames the deputy foreign minister for using his office for personal interest and embezzlement of funds.

Da’ud was apprehended last week over an arrest warrant issued by Benadir regional court in line with the graft charges he is facing. Somali Police Forces launched a raid at the Ministry headquarters in Mogadishu.

On Monday last week, the Ministry of foreign affairs issued a statement denying the accusation against Da’ud.

“The Ministry of Foreign Affairs strongly denies the involvement of our deputy minister in any involvement of abuse of office and embezzlement of public funds. This is a charge far from truth and slander.”

This is not the first arrest, last month Dahir Mohamud Nur, the Director of IDP resettlement was arrested for allegedly stealing $84, 0000 in public funds.