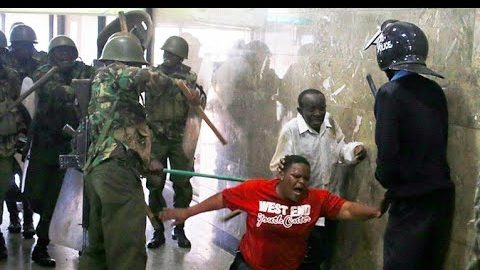 NAIROBI—Drama and intense running battle marked the first night of national curfew as police, some of them clad in anti-riot gear, spilled on the streets of cities and major towns across the country as part of President Uhuru Kenyatta’s measure to contain the spread of the Covid-19.

In Nairobi, most city-dwellers were caught in the crazy Friday afternoon snarl-up along highways heading out of town. As the 7PM curfew set in, most of the stranded passengers were left with no choice but to group-up in a bid to create solidarity and explain their grievances in unison.

“We were ready to leave town by 6PM but most of the matatus and taxis closed business earlier than expected, leaving us stranded,” John Mututho, a resident of Kitengela explained to the head of police unit on patrol along Tom Mboya Street.

In Eastleigh, residents were caught unawares as ferocious policemen descended on them. Most traders took to their heels to escape the lashes meted on their colleagues.

“I left my wares unattended. It’s not mine… I don’t know what I will tell my boss,” Mohamed Warsame, a street vendor told Opera News.

In Mombasa, hundreds of people were caught up in the rush to beat the 7PM deadline. Police lobbed teargas at hundreds of people waiting to cross the Likoni channel. According to a video widely shared on the social media, armed policemen are seen clobbering passengers waiting the ferry.

Section of Kenyans have been pleading with the government to institute a total lockdown across the country as others maintain the curfew will complicate their lives as workers, who commute to their posts but do not have their own means of transport.

It will also affect ordinary people’s lifestyle for they must be in their homes before 7pm and are not supposed to venture out before 5.am.

According to the Public Order Act, “any person, who contravenes any of the provisions of a curfew order or any of the terms or conditions of a permit granted to him shall be guilty of an offence and liable to a fine not exceeding one thousand shillings or to imprisonment for a term not exceeding three months, or to both such fine and such imprisonment.”

However, there’s has been accusations of police brutality but proponents of the harsh measures maintain that the actions of the police remains only viable option to contain the spread of the Covid-19 pandemic.