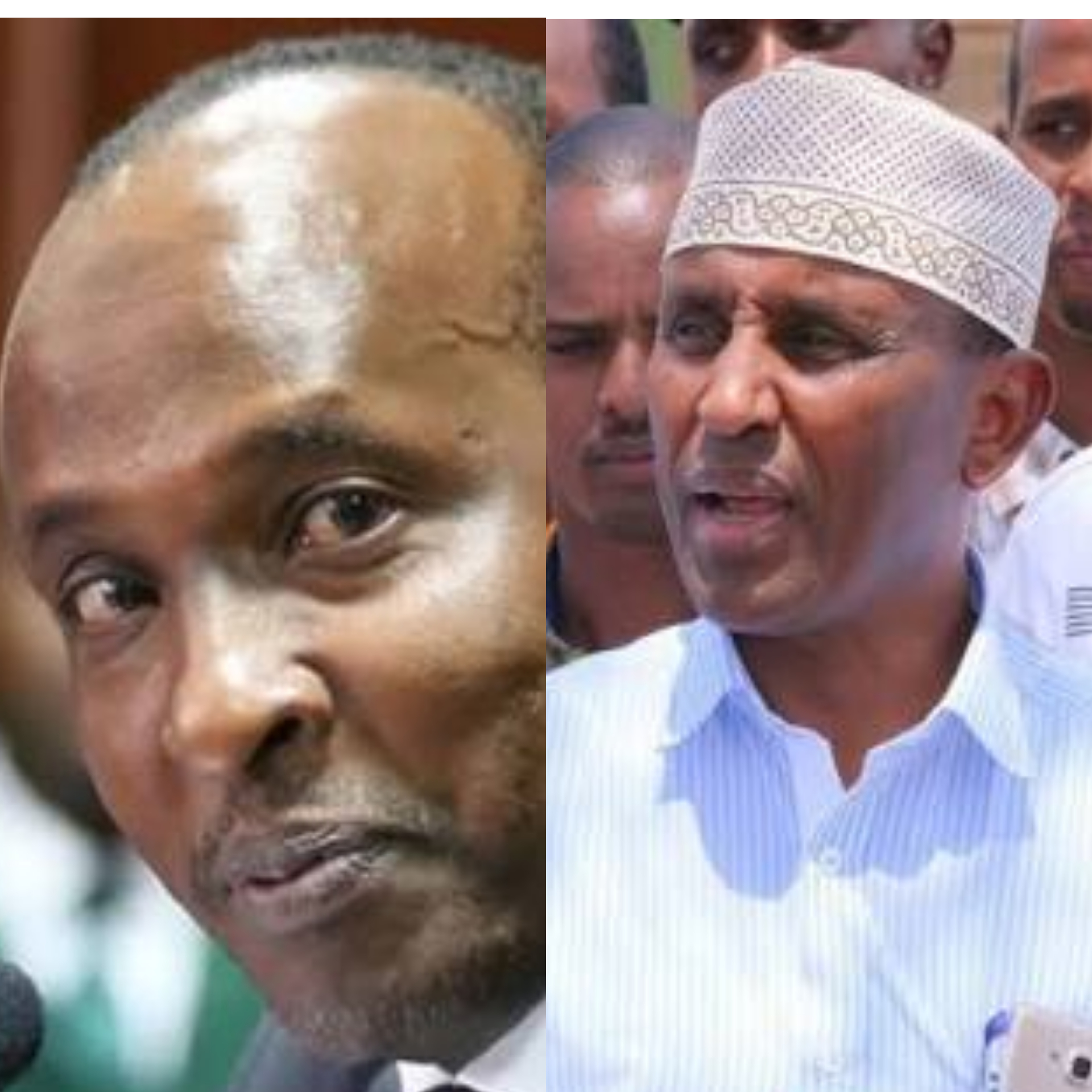 GARISSA—Majority Leader Aden Duale and Garissa governor, Ali Korane are on collision course if latest indications are anything to go by.

Darlings during last year’s General Elections, the duo are beginning to draw battle lines and political supremecy is at the centre of their fued.

In the last elections, the Garissa Township MP spearheaded an aggressive, well orchestrated campaign against then incumbent governor, Nadhif Jama’a.

At a fundraiser for the gubernatorial campaigns, Duale generously donated sh 10 million towards Korane’s campaign fund.

He also secure a direct Jubilee nomination for him.

According to local political commentators, Duale and Korane are both seeking the control of their Aubuduwaq clan, their main voting block.

Since the 2013 polls when Duale was appointed as the Majority Leader in the National Assembly, he assumed a new role—the de-facto clan political leader of the Abuduwaq sub-clan of the Ogaden in Garissa County.

However, that role is seemingly being challenged by Governor Korane who also hails from the same sub-clan.

Opinion leaders have since shifted base to Korane in hunt for plum county jobs and lucrative contracts, a move that enraged Duale, prompting him to fight back and safeguard the influence he had in his backyard.

Since May, Duale attended over six public events alongside Governor Korane in what the locals say is a gesture to reassure his political influence and grip of the clan.

Clan is a significant factor in Garissa and entire North Eastern politics. It also defines the lifeline of the politicians seeking to retain their seat.

“Duale is a skewed politician and is using proxies to drive his agenda,” Mohamed Hassan, an online political commentator told Kulan Post at Garissa’s Almond Hotel where he was facilitating a civic education drive.

“Besides striving to keep relevance in Garissa politics ahead of 2022 elections, Duale is mounting competition against the governor,” he added.

Recently, one of the governor’s close confidante and the MP for Fafi Constituency, Abdikarim Osman” decamped” to Duale “side ” in a move that agitated Korane and his team.

“Abuduwaq has three elected MPs and a Woman Rep(esentative). Duale has lately courted the legislatures and the MCA’s into his camp,” Hassan noted.

“We want to warn politicians secretly meeting in Nairobi against orchestrating an impeachment motion against the County Speaker,” Korane said, flanked by his deputy when he flagged off ambulances procured by the county government.

There’s speculations that Duale influenced section of MCAs to table the impeachment motion in a bid to send a powerful signal to county leadership as well as neutralise Korane’s influence in the assembly.

Both Duale and Korane accended to power through negotiated democracy.  The former capitalised on his incumbency and Jubilee influence to defend his Garissa Township parliamentary seat while the latter wrestled with Nadhif Jama’a despite his resource and influence.

“However, Duale spearheaded Korane’s campaign strategy and put his backyard in order to back him for the top seat,” Hassan said, adding that had Duale not intervened Nadhif would have carried the day.

Korane’s camp accuse Duale of having single-handedly submitted the names of Jubilee nominated MCA’s without consulting the governor which he’d expected.

“That was the beginning of their rift,” Hassan said.

In what appeared like a revenge mission, the governor, through his delegated authority, started appointing officials for top county positions such as Chief Executives Officer, Chief Officers and departmental directors without engaging his main backer, Aden Duale.

Some of the appointments clearly sidelined Duale’s close associates who were part of the pre-election pact.

Idris Mukhtar was shot on the head in Kileleshwa mosque on August in what the police say was an attempted murder of the former Garissa County CEC for Finance during Nadhif’s reign.

Despite his earlier support for the governor, Mukhtar felt shortchanged and drifted towards the opposition camp where he kept the governor on toes.

Before the shooting incident, Idris wanted to file a private prosecution quizzing the credibility of Governor Koranes’s Masters Degree.

His shooting probe took a new twist and linked Garissa governor as the main suspect.

Governor Korane denied the accusations of his involvement in the deadly shooting.

A section of elders in Garissa alleged that Duale was behind the arrest of the governor, prompting a series of press conferences that denounced Duale leadership.

Majority Leader Aden Duale is among the top sworn defenders and staunch supporter of Deputy President William Ruto. He publicly stated that he would support his bid in 2022 presidential elections.

It’s presumed that Duale may not contest for an elective post. Instead he will likely spearhead Ruto’s national campaign machinery.

“A threat on his backyard at this early stage and an impending gruesome campaign for united Garissa in favour of (Deputy President) Ruto is causing unease on Duale who strives to front undivided loyalty from his Abuduwaq backyard,” Hassan observed.

As the cracks in their relations become more clear, the duo who are married to the two daughters of the former Chief of General Staff  Mohamud Mohammed, they may soon slip into public spat and early political fall-out. ·