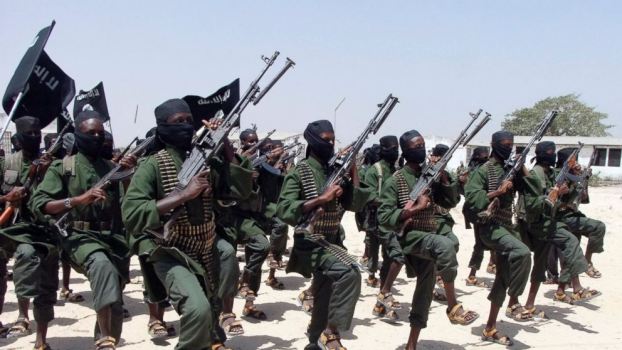 NAIROBI—Authorities are tracking down the whereabouts of two university students believed to have crossed over to Somalia to join the militant group Al Shabab.

Mohamud Yassin Ahmed, a second year Bachelor of Science student at Nairobi University and Mohamed Abdelswamed, his cousin from Moi University Nairobi campus, have been reported missing since April 21.

German ambassador to kenya (Right) with Dr Yassin Amed (middle) and a collegue when the German envoy paid a courtesy call on his office in Nairobi.

Strikingly, Mohamud is the son of a senior government official, Dr. Yassin Ahmed who is the director if the National Museums and former member of the National Cohesion and Integration Commission (NCIC).

Police also believe that the two students left on short notice after they had written their last papers and sold their laptops to a secondhand dealer in the city. According to the university of Nairobi laundry attendant, Mohamud fetched his wet clothes from the laundry in hurry and he was never to be seen again.

“He picked them while still wet and paid the attendants there as he rushed out. He even left some of his clothes there,” the OCPD Central Police Station, told reporters.

His parents said he left home saying he was going to join his classmate for study since the final semester examination were fast approaching.

It also emerged that the two students deliberately switched off their phones a week prior to their disappearance in order to minimize communication with their friends and colleagues while periodically talking on the phone with their family members.

Mohamed’s father, Dr Yassin said he would not comment on the matter, saying he reported the matter to the police and that the case was under active police investigation.

“Let us not discuss it please. It is a matter in the hands of police,” he said.

Speaking at the University of Nairobi Thursday, the director of the National Counter Terrorism Centre, Mr Isaac Ochieng has warned that the rate at which the students were getting recruited was alarming.

“There is increased recruitment, training and indoctrination of the youth into terrorism cells. These terror groups are now targeting brilliant youths to recruit,” he said.

He added that the National Security Intelligence Service were aware of the vindictive programme, terming the situation as “bad’’.

When asked why the government was sitting on the intelligence if it was true, Mr. Ochieng said the Anti-Terrorism Police Unit (ATPU) would strike when the time was ripe.

The revelation comes after it emerged that one of the militants who carried out the deadly Garissa University attack where at 150 people were killed, was a former brilliant students of Law at Nairobi University.

The disappearance of the two university students reaffirms the believe by counter-terrorism experts that Al Shabab has resorted to targeting brilliant youths since most of the recruits that join their rank and file are Physics and Medical students.

[UPDATED] At least 14 killed in Mandera, 11 others injured