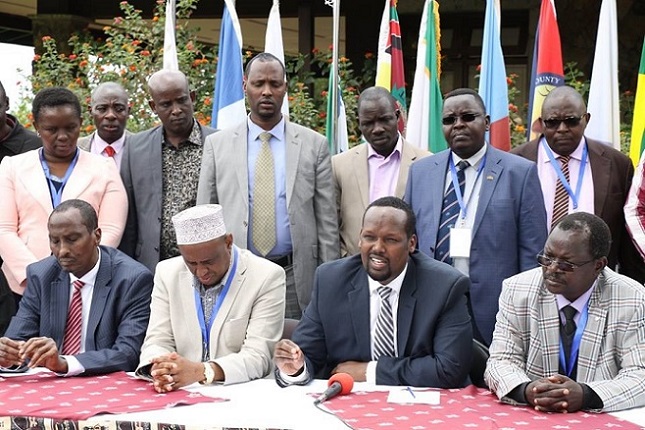 Governor’s from FCDC at a past function. (Courtesy)

NAIROBI—Governors from pastoralist counties are planning to unveil a political lobby group ahead of the next General Election. The ten governors want to rival the influential Pastoralist Parliamentary Group.

According to sources privy to the initial idea and formation of the structural governance of the group, the governors started entertaining the idea shortly after the Pastoralist Leadership Summit  held in Garissa late February.

“The governors realized that the legislators were taking centre stage while them, with all ther power and resources at their disposal, were pushed to the background,’’ the source intimated to Kulan Post.

The governors also want the lobby to raise the profile of pastoralist issues and change negative attitudes towards pastoralist counties and encourage investments.

They also want to lobby for increased budgetary allocation and infrastructural development to the ten counties.

The formation of the group will call for a renewed supremacy battle between the county heads and parliamentarians. The leaders at both levels are now members of the Frontier Counties Development council [FCDC].

The head of the Pastoralist Parliamentary Group and Garissa Township legislator avoided the question on the formation of a rival lobby group when contacted by Kulan Post.

The technical committee has suggested names of several governors to head the new outfit. Governor Josephat Nankok of Turkana and Mandera Governor, Ali Roba have both been struck out due to their limited influence in the 2022 politics. Governor Nanok and Roba have both served their constitutional two terms.

“The plan now is to select Wajir governor (Mohamed Abdi) due to his age and latest bid to push for reconciliation in his county, a gesture found most appealing by the technical committee,” the source added.

A statement by the Wajir governor’s communication team said move to have him as head of the governor’s group was positive.

“We have no idea…but if at all there’s such a plan, then the technical team must have scrutinized all factors to suggest his name since he (Governor Abdi) is non-partisan and has a good rapport with all the local leaders,” Ahmed Shakur, the head of governor’s Press, said.

On March, leaders from the pastoralist counties said there is no political outfit that can dare ignore them.

NAIVASHA: Isahakia community protest bid to remove them from their land