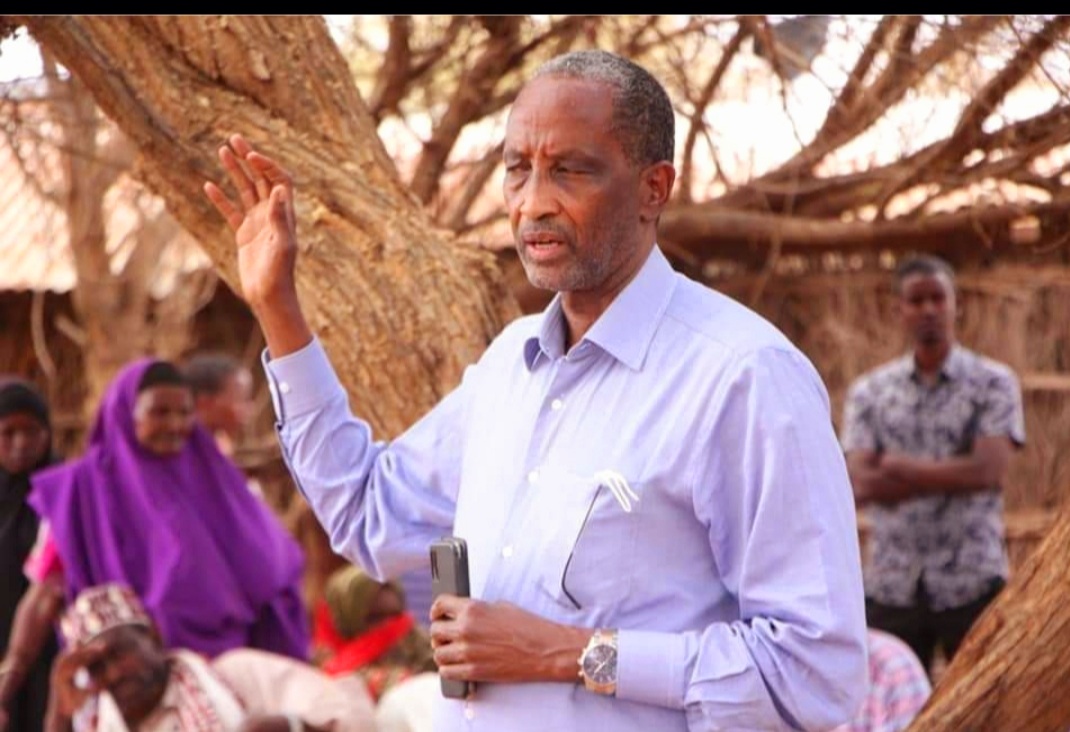 NAIROBI—At the height of the ongoing process to appeal the October verdict by the Fai Sultanate, the people of Wajir are curious of the identity of one man among the four candidates who went silent and deliberately decided not to indulge in the bashing of the verdict.

In late October, the Fai Sultanate released their verdict; a preferred gubernatorial candidate by the Fai sub clan, a vote-rich block.

“After long deliberations with Ugas (elders) of Fai Community, speaking on their behalf as the Sultanate.

“We have unanimously settled on Hassan Wehliye Khalid to be the flag bearer of Fai Community in Wajir County Gubernatorial contest in 2022 General Elections,” said Sultan Najib Ugas Ahmed Liban, who doubles as the chairperson of the Sultanate of Fai community.

Ugaas Sheikh Mohamed during his last rally in Wajir town.

Bash shelved his ambition days ahead of the verdict as Wehliye just immediately begun gathering confidence from the voters while Ugaas went on a rampage to undo a process that he feels “betrayed” him for not honourig a 2016 pledge to support him if he stepped down for the former governor, Mohamed Abdi.

Wehliye, is the Coast regional head of the Ethics and Anti-corruption Commission (EACC). On the other hand, Ugas Mohammed,  the only candidate who openly challenged the Sultanate verdict, is  an Information Technologist (IT) and has previously worked with philanthropic orgernisations, mainly from Gulf states. He has an MBA in Project Management and a Bachelor of Science in Information Systems.

However, one man—Dr Hassan Mohamed Adam—remains mysterious because he neither came out to campaign in defiance of the Sultanate verdict nor totally agreed with the outcome since he is believed to be the candidate behind the ongoing appeal process presented to the Sultanate last week by four clerics.

An individual close to Dr Hassan told kulan Post that : “Unlike the two other candidates who started parallel campaigns, the Dr (Hassan) is the eldest and has alot holding him back from unleashing his bid. That’s probably why he decided not to launch campaigns and waited for an appeal platform.”

Hassan Wehliye during meeting with the disabled community in Wajir.

Born on the 10th of July 1959, Dr Hassan is a trained medical doctor with a career spanning over three decades in the sector. He is now the proprietor of the high-end The Nairobi South Hospital in South C.

Between 1974-79, he was student at the Alliance High School. He later joined University of Nairobi for a Bachelors Degree on Reproduction Health; Obstetric Gynaecology. He graduated in 1993 and three years later,  he got admitted to the Boston University to pursue Masters Degree in Public Health.

His first formal posting happened in 1987  as a Medical Officer in Machakos District where he also served as the officer in charge of Kangundo Sub- District Hospital.

After serving the Machakos facility for two years,  Dr Adam joined the Kenyatta National Hospital as an Obstetrics and Gynecologist where he remained posted for three years.

Records obtained by Kulan Post indicates that Dr Hassan served at the KNH as a trainee under the supervision of the University of Nairobi as part of his Post-graduate degree in obstetrics and gynecology.

Between 1993 and1994, he was the Senior Registrar (Consultant) at the Kenyatta National Hospital. His role, according to our records, included running care services as well as teaching under-graduate and post-graduate students.

In 1995, Dr Hassan was appointed  the Medical Superintendent at the Pumwani Hospital. He was a member of a Presidential Task Force formed by the late President Moi to improve healthcare services in Nairobi province.

Kulan Post visted the hospital. We found out that the 300- bed capacity facility was  recording 70-80 deliveries a day, possibly among the highest in the world in a single maternity-only facility.

It was during that period that mortality at the facility reduced from 500 per 100,000 to approximately 100 per 100,000. Most of the operational protocols currently in use were developed during the period he was the head of the facility period.

Dr Hassan became the the Medical Officer of Health in Nairobi after his stint at Pumwani came to an end. During that period, service delivery in the health department significantly improved as indicated in the Ndungu report.

Later, he was appointed as the Director of the Division of Family Health, responsible for the health of the mother and child in Kenya.

In 2002, he joined the Department of Primary Health Care as the director at the Ministry Headquarters. This was inclusive of all departments except hospitals.

Between 2003 and 2005, Dr Hassan served as the Chief Executive Officer of the National Hospital Insurance Fund (NHIF) The organization had two main challenges during this period: it was suffering a major public relations crisis and needed a swift action to regain public confidence since the giant public firm was facing a number of scandals.

In addition, it was necessary to improve the service delivery through policy and institutional overhaul.

Records at the NHIF indicate that thirteen audited financial records were submitted to the Parliamentary Public Investment Committee while he was at the reign.  Dr Hassan was Awarded Presidential Commendation (OGW) by Mwai Kibaki for his effort at the institution.

The current NHIF headquarters was roughly under construction albeit snail pace for close to a decade with an estimated starting budget of sh 800 and later escalated to sh 4.5 billion.

However,  when Dr Hassan, a holder of certificate in public sector neogatiation and governance from the Kennedy school of Government at Havard joined the institution, he gave the contractors three months to finish the project and gave them copy of cancelled lease contract with NHIF if they fail to honour their side of the bargain. Staff were forced to moved into the partly finished building within the stipulated three months.

This could be among the reason why the Ulamaas last week wrote to the Fai Sultanate in Wajir to reconsider the October verdict on the preferred gubernatorial candidate, saying several items were not factored in when the announcement was made.

the Ulamaas wanted the Sultanate to explain what they based their choice of the preferred candidate on: was it age, career or wealth.

“They basically want to see the scorecard,” the highly placed source stated “so as to address the confusion being felt by the two candidates left out.”

From examination of their experience and length of public-related engagement, Dr Hassan has a vast experience, relatively advanced in age and has managed public entities.

Kulan Post contacted the doctor for comment following the submission of the appeal. He said would only give his reaction after the appeal outcome is out.