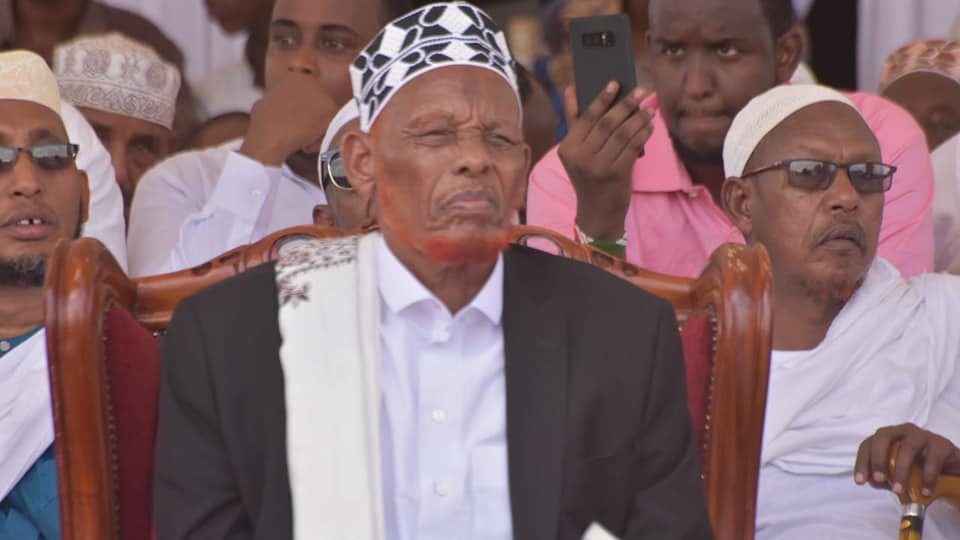 NAIROBI—Wabar Abdille Wabar Abdi is a cultural figure and King of the Degodia and the larger Saransoor clans. The Wabar is the 12th Wabar in the leadership lineage and this is his first-time visit in Kenya to enhance peace and unity between neighbouring communities and counties.

The King jetted into the country last Friday from his home country of Ethiopia. He was received by a mammoth crowd who went to the Jomo Kenyatta International Airport to receive their revered majesty.

Since then, he met with members of the Degodia clan residing in Nairobi and leaders from the larger Nothern Kenya at a luncheon at Crowne Plaza.

On Monday, Wabar Abdi was invited by State House to meet with President Uhuru where he was bestowed with the Elder of Burning Spear (EBS) award, one of the highest national honours for his role in peace-building.

Wabar Abdille is now in Wajir to meet with local Degodia residents who make up the largest population in the county. He also set to travel to Mandera for similar functions.

According the spokesman, Wabar Abdille has never commented, backed nor discussed politics in his life.

“Politics has no fence-sitting and the Wabar cannot choose to support one candidate or political group since he’s the uniting factor in the (Degodia/Saransoor) community,” Ma’alin Umar said.

This is a stark difference to the local Ugasses and Sultans who denounce candidates and back others during the elections.

Wabar Abdille has at least 600 camels, 300 heads of cattle and 1,000 goats on top of a vehicle and a house. Despite his financial status, the community contribute  wealth once in a while although he donate  it to the poor families and hardly keeps it.

“His health and wellbeing is taken cared of by the clan where they gift him animals, cars and house yearly,” Ma’alim added.

Unlike the governing structure of other cultural leaderships, Wabar Abdille has 14 executive delegates who he reaches out for opinion and advice when there is a problem.

“Among his delegates are religious leaders, professionals, elders, businessmen. The  number of delegates is based on how large some of the sub-clans are,” Ma’alim stated.

Wabar Abdille is the uniting figure for all the Degodia clan members in Somalia, Kenya and Ethiopia.

“He appoints emissaries to represent him in areas where he (Wabar) can’t reach,” Ma’alim said, adding that the Wabar “Only deals with matters concerning members of the Degodia clan and the people they live with.”

People who interacted with Wabar Abdille said that he’s a man of few words in private. In public, his spokesman does the talking while he only rises to pray for the community.

This is the first time Wabar Abdille visited Kenya and will stay until December 19th.