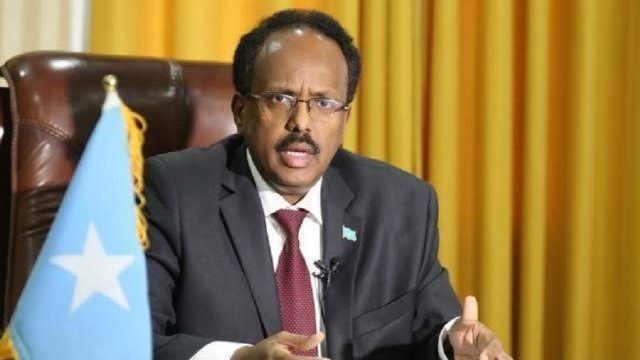 Mohamed Abdullahi Mohamed, popularly known as Farmajo was elected into Office as the 9th President of the Federal Republic of Somalia on February 8th 2017 in what was a peaceful transition after the incumbent president, Hassan Sheikh Mohamud conceded defeat and congratulated his successor.

His election was welcomed by thousands of Somalis who quickly took to the streets to celebrate what they termed as the birth of a new dawn in the war-torn country. Farmajo, apart from his record during his eight months stint as prime minister between 2010 and 2011 has also dangled the card of nationalism as a presidential candidate and this helped him ascend to the highest office in the land.

His closest competitor, the then incumbent President Hassan Sheikh Mohamud was seen as too close to Somalia’s arch-rival, Ethiopia and that is believed to have denied him a second term in office. President Farmajo took on the mantle of a deeply divided state characterized by insecurity, political and socio-economic crisis.

A country where Alshabaab continued to reign supreme in many regions mounting incessant terror attacks including on the Capital Mogadishu that have claimed the lives of innocent Somalis.

Fast forward, three years later, President Farmajo’s administration has registered some remarkable achievements which endeared him to many Somalis in the country and abroad.

For the first time, the government has begun paying its security officers from the public coffers under a new system where payments are linked to biometric database containing soldiers’ fingerprints, personal details and bank accounts, a paradigm shift from the old manual system where most of the soldiers would have to put up with months without salary.

The system has also operationalized an Integrated Special Stabilization Force. Ghost soldiers were expunged from the records as part of security reforms fronted by Farmajo government. Somalia has invested heavily in economic and institutional reforms that helped IMF and World Bank consider the horn of Africa country eligible for debt relief under the enhanced Heavily Indebted Poor Countries (HIPC).

This is an important milestone towards writing off Somalia’s $5.3 billion debt. This achievement means that the Country will be back into the fold of international financial system after 30 years in the cold. It will unlock access to financial credit or resources to strengthen the economy, create employment and reduce poverty.

According to Somali High Frequency Survey,2017, Somalia has a poverty incidence of 69.4% and per capita income of about $400.

One of the greatest legacies of President Farmajo is his shuttle diplomacy mission across the Horn of Africa. He first closed ranks with Ethiopia, proverbial enemy of Somalia, buoyed by the election of Abiy Ahmed as the Prime Minister.

Diplomatic relations between the two countries has been restored and free movement of people and goods allowed paving the way for a political and economic integration complete with tripartite cooperation agreement between Ethiopia, Eriteria and Somalia.

Farmajo administration has been praised for building a very strong central government where the Federal government exerts its authority on Federal Member States that were seen to be operating on ultra vires. Out of the five Federal Member States’ governments, the President has been able to bring three into the submission of Villa Somalia and a lot of pressure is being applied on the other two namely Jubbaland and Puntland governments to align and integrate their policies into the national plans.

Somalia has had moments where her sovereignty and territorial integrity were attacked by foreign countries motivated by lawlessness and weak governance structure that existed in the country. This norm has been stopped by President Mohamed Abdullahi by putting foreign countries and investors infringing on the sovereignty of his country on notice.

A case in point was that he declared Berbera port deal between Somaliland and United Arab Emirates null and void on the ground that his government was bypassed. In every national and international platform that he addressed, Farmajo stressed the importance of respecting the sovereignty, territorial integrity and political independence of Somalia.

The strong and hardline position Somali government has taken regarding the maritime row between Kenya and Somalia is yet another pointer that Farmajo is serious about his resolve to protect the territorial integrity of his country. He declined several attempts by Kenya and Africa Union to have the dispute resolved outside of International Court of Justice (ICJ).

The disputed territory is about 100,000 square kilometers with prospects of oil and gas deposits. Another achievement registered by the ‘Nabad and Nolol’ government is the successful efforts to regain control of Somalia’s airspace from International Civil Aviation Organization, ICAO, regional office in Nairobi for the first time in nearly 27 years since 1992 when civil war broke out in the country following the collapse of Siyad Bare government.

Arguably what helped Somali government boast of this colorful scorecard is the camaraderie between the President and his Prime Minister. President Farmajo and Premier Kheyre have been able to stick together unlike their predecessors where the occupier of Prime Minister void could hardly last in office for a year.

Despite several attempts by foreign powers to sow seeds of discord between the duo, Farmajo and Kheyre weathered the political turbulence and have since their election to office gelled through thick and thin like the Siamese twins.

It is a known fact that Hassan Kheyre retains the enviable record of being the longest serving prime minister in the history of Somalia since the days of Abdirashid Ali Sharmarke.

The government of Somalia was also praised for its efforts to negotiate for agreements to free Somali prisoners in foreign countries. In January 2018, over 76 Somali prisoners were freed from Indian jails who were held there over piracy-related offenses.

In July 2017, 114 Somalis released from Ethiopian prisons arrived in Mogadishu after Hassan Kheyre negotiated with Ethiopian government for their freedom.

Furthermore, the government has improved the security in the country. There have been successful operations to retake and stabilize territories previously held by Alshabaab in lower Shabelle and lower Juba.

To strengthen democracy in Somalia, President Farmajo on Friday 21st February 2020, has signed Somalia Federal Electoral Bill, 2020 into law that will allow Somalis to vote in Parliamentaryelections in one-person-one-vote model for the first time since 1968.

However, clouds of doubts still hang over the applicability of this law on the impending election in the country. Despite these track records, President Farmajo is not without low moments.

He has been accused by the opposition and Human Rights activists of suppressing media freedom in Somalia. It is reported that journalists normally receive threats, intimidations and even some arbitrary arrests from the State. In 2019 alone, the Mugadishu government detained 38 journalists as reported by Amnesty International.

Villa Somalia has also been involved in extra-judicial killings and employment of excessive force with the help of foreign troops. In December 2018, days to the South West Regional election, Somali forces in cahoots with Ethiopian forces shot and killed 15 civilians who were protesting against the detention of a former Alshabaab member Muktar Robow Mansoor who at the time declared his interest for South West Federal Member State Presidency.

Be that as it may, Somalia is set to hold an election late this year for parliamentary elections and early next year for presidential elections. President Farmajo is banking on his legacy for a second term in office and is racing against a historical record and a glass ceiling that has not been shattered yet.

Throughout the history of Somali governments from independence to the present time, no president has ever succeeded in securing a second term in office. This is largely because of clan-based politics that has always been the hallmark of Somalia’s ‘democracy’.

President Farmajo is also faced with the reality of the unwritten rule of rotational presidency between the Hawiye and Darood clans of Somalia. Many pundits are predicting a Hawiye presidency and a Darood premier in the next establishment.

Highly placed sources say that his closest friend, Prime Minister Hassan Kheyre has his eyes trained on the top seat and this may complicate Farmajo’s political arithmetics.

Despite pressure from international community for a universal suffrage, the electoral body in no uncertain terms laid bare the impracticability of holding an election where citizens are allowed to vote not at least before April 2021.

This opens a window for term extension, a position that is being contested by the opposition leaders. In the circumstance therefore, the most likely scenario is that the ‘4.5’ system will be applicable in which 329 members from the lower and the upper Houses will have to vote for the President.

President Farmajo expects significant support from some regions and given that Somalia has no strong Independent Electoral Commission, the Federal government can wield considerable influence in the selection of the MPs from these regions.

Effectively, the President can help install ‘friendly members of parliament’ from Banadir, Galmudug, part of Jubaland, Hirshabelle and South West regions where his efforts have been focused on.

However, this can only hold true if Farmajo and Kheyre can work together in the coming elections rather than working at cross purposes.

For the sake of steady development, economic growth and to continue forth the stabilization efforts taking place in Somalia, I hope the vicious cycle of ‘one term only’ presidency will be broken this time round and that President Farmajo will be granted a second term.

CPA Hassan Adow, is an economist and a policy analyst based in Wajir County