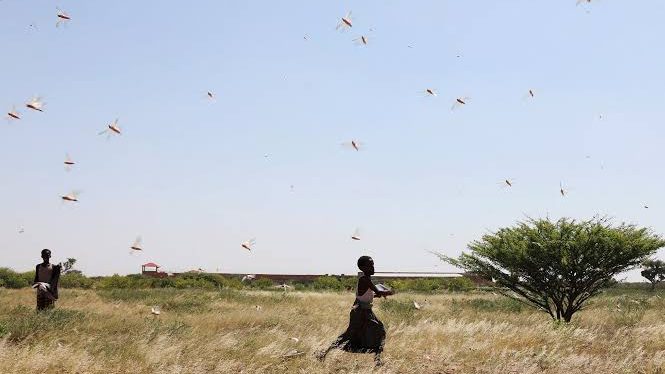 The region’s residents rely mainly on pastoralism for their livelihood but are now worried that the pests could destroy vast grasslands leaving their livestock at risk of starvation.

The locust invasion in the country comes following another influx of the pests in some regions of Somalia.

Earlier this month the Food and Agriculture Organisation (FAO) warned that the locusts may spread to other East African countries if measures were not taken to stop the invasion.

Daily Nation reports locals to say that the locusts entered Kenya from the eastern side of Somalia and settled in Wajir county.

Wajir County’s Department of Agriculture said that they moved for close to two hours in the area before settling eight-10 kilometers away from Kutulo town, which sits on the border of Wajir and Mandera.

Locust invasions are among the biggest threat to agriculture. The insects that travel in huge numbers can destroy large tracks of farms in a short period of time, leaving residents at risk of famine and starvation.