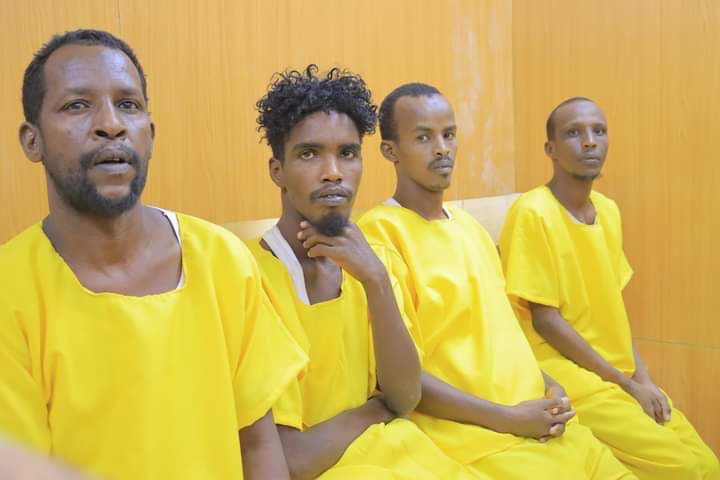 MOGADISHU—Four suspected members of the Somali militant group Al-shabab, an affiliate of Al-Qaeda in East Africa, have been sentenced to death in the northern semi-autonomous state of Puntland.

A military court in Bosaso on Tuesday found Jama Adan (44), Ayub Omar Shire (32), Abdullahi Salad Muse (28) and Mohamud Abshir (25) guilty of the charges levelled against them.

The four were accused of planning and executing militant activities for al-Shabab and the Islamic State (IS) at different times, as well as creating improvised explosives.

According to the prosecution, the four were members of a cell headed by Jamaa who in 2017 left for Kismayo after killing three people under the instructions of Al-shabaab.

Jamaa assembled a criminal group of three others immediately after returning from Kismayo, the interim administrative capital of Jubaland.

The people he recruited after coming back to Bosaso town were all drawn from the transport sector where he previously worked at.

For five years, Jamaa and his team would engineer the killing of dozens of people including a mother and her disabled child at her house in Bosaso.

According to court documents, the cell assembled and detonated explosive bombs targeting a convoy of the President of the Federal State Said Abdullahi Deni in February. Two soldiers accompanying the regional President died in the attack.

Al-Shabaab claimed responsibility for the attack that also injured four others.

The group monitored the area for four days before deciding on where to plant the explosions targeting the President.

“They came with two vehicles to plant the explosives. To disguise themselves, they came at night and acted like they had a mechanical problem to divert attention as they planted the explosives,” Col. Mohamed Foodcade, the Prosecutor told the court.

Mr Jamaa, the leader of the cell has been receiving instructions from the mastermind of the group, a man identified as Abdirahman Isse Ahmed, alias Lahor, believed to be the group leader.

Lahor, 63, has been sentenced to death in absentia by the regional state military court.

The court heard that the criminal group received money ranging between $ 100 and $ 1600 for a mission from Lahor who is on the run, to carry out criminal activities for al-Shabaab and the Islamic State.

Jamaa planted an explosive device that targeted delegates of Gamal Hassan, the Minister of Planning and International Cooperation of the Federal Government of Somalia who was seeking re-election to the federal parliament.

“The court sentences the four suspects and Mr Abdirahman who is absent, to a death sentence by the firing squad,” the court said in its ruling.

Puntland Police have also arrested another suspect identified as Mohamed Abshir, who is helping security agencies with investigations.

The militant group al-Shabaab which controls parts of southern Somalia has besieged the UN- backed Federal Government in Somalia and also harbours territorial ambitions against Kenya.

The four now have thirty days to appeal the decision of the court.