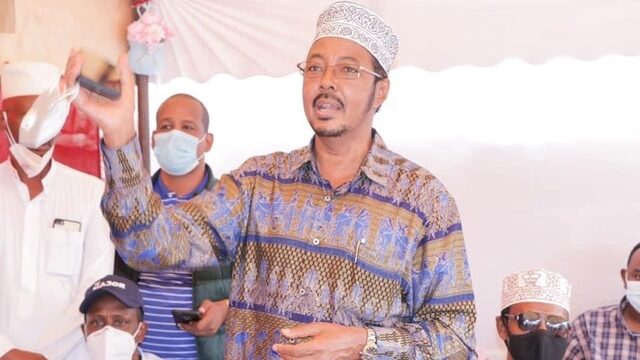 On Friday, March 2020, Eldas Constituency legislature Adan Keynan led an entourage comprising of high profile leaders, renown Muslim preacher Mufti Menk of Zimbabwe and other members of the public to the constituency West of Wajir town on a chartered plane to open a just completed modern Jamia mosque in Eldas Town.

The event was commissioned by Mufti Menk assisted by CS for Tourism and Wildlife, Najib Balala.

In the event, which seemed more of a public baraza held inside the mosque than a religious function, each dignitary was given a chance to speak; not to talk about the importance of having a mosque but heaping praise on one individual—Adan Keynan.

What amazed many was the deliberate move by the MP who disregarded the charity organisation that funded the construction of the mosque. In his speech, the legislature confidently stated that he used funds marshalled from friends locally, other neighbouring constituencies and across the country to build the beautiful mosque. What bewildered many was the claim that he never sought support from the Arab donors!

“I made a personal commitment to come up with this facility without any external support,” said Adan Keynan during the mosque-opening event.

Contrary to his claims, the construction of the mosque was sponsored by Muslim Global Aid, an independent humanitarian and development organisation based in Australia. The charity organisation offers humanitarian assistance to Africa and other parts of the world.

According to crucial documents I am privy to, the charitable organisation donated more than sh 170m towards the construction of the mosque. Well-wishers topped sh 30m.

The initial project plan was the construction of a three-storeyed building with an Islamic institution and a WAQF, an Islamic endowment of property under the Islamic law.

The documents shows that a foundation owned by the MP—Dr Adan Keynan Foundation—was tasked to undertake the construction of the project.

The construction of the mosque was first started in 2013 but later halted in the initial stage after the MP reportedly diverted the funds towards personal initiative. Word has it that the funds were used during grueling 2017 election campaigns.

Other additional report indicate that the funds might have been used in the construction of hospitality outlets elsewhere, several petrol stations in Eldas and other investments abroad.

The construction resumed mid 2018 after contractors allied to the area MP were convinced to make a fundraising. It took seven years to complete.

Even after the legislature claimed to have personally funded the construction of Eldas Jamia Mosque, he did not divulge any information on the exact amount used in the construction or the friends who he alleges to have contributed to the noble project.

“It is not necessary for me to say the amount used in the construction of the mosque, let us also pray for the friends who contributed something but i will share their names,” Keynan said.

Some political commentators argue that the political relevance of Adan Keynan—both in the county and the national platform—is dwindling and it’s attributed to his “silence- arrest policy” that he has adopted to quell his critics and shame those deemed as his opponents.

The MP, whose is said to have not launched a single project since he was re-elected in 2017, has now resorted to claiming credit for projects he never initiated within his mandate. As such, there’s a coordinated effort by the area communities to opt for an alternative leadership with the hope of seeing difference in how matters are run.

Over his last 25-years in politics, Adan Keynan is now facing the strongest revolution; the start of “Eldas Professionals” an association that brings together all the professionals from his constituency. The group is seeking to provide an alternative leadership.

The ball now is on the court of Eldas constituents as to whether they will continue to allow be ruled by overdated idea captained by Keynan, or vote a new leader who will shape the future of not only Eldas but Wajir county as a whole.

~The writer is a constituent of Eldas and part of a movement seeking accountability on how public funds are utilized in the area.